Hacker
Yuuko Kamishiro (神代 悠子, Kamishiro Yūko?) is the heir of Kamishiro Enterprises, and the leader of Zaxon. Her Enjoy! Chat avatar is a grey wolf named Yuugo.

Yuuko is a woman with shoulder-length black hair, black eyes, and a small chest. Yuuko's hair is cut in a way that resembles two staircases in the back. She wears a black and white dress with long sleeves, a gray zipper in the collarbone and a white ruff on the neck. The dress is mostly black and has a white part designed as if it was another strapless, backless dress. At the dress's bottom part, the transition from white to back resembles two staircases on the front and two in the back. She also wears black goggles with gray lens and white straps with a black line in the middle on her left arm, a black pantyhose, and gray shoes.

Yuuko talks with a low voice, rarely raising it. She also loves food.

Yuuko meets Aiba in the Central Hospital's lobby. Yuuko is talking to a nurse, and then takes the elevator soon after the two see each other. They meet again at the ICU, and she asks what Aiba is doing there. After Yuuko sees Aiba's true body in the ICU, she mistakes the digital Aiba for a sibling. When Rie Kishibe arrives, Yuuko tells Aiba to hide. Rie and Yuuko talk, the latter surprised, as she thought Rie wouldn't show up that day. Rie assumes Yuuko is hiding her "lover" in the next room—where Aiba is hiding—and opens the door. After Rie leaves, Yuuko wonders where Aiba went to.

Later, Yuuko goes to the Kuremi Detective Agency under the alias Yuuko Yamashina (山科 悠子, Yamashina Yuuko?), and is surprised to see Aiba. Yuuko claims her father to be Makoto Yamashina, and that he is missing, and requests help to retrieve his EDEN account. After Aiba retrieves Yamashina, and the teen, with Kyoko go to Yamashina's house and find out his only daughter is Chika, Kyoko calls Yuuko to the agency's office to give her the news. As Yuuko leaves, Kyoko asks her to use her real name next time, and calls her Yuuko Kamishiro.

Yuugo (ユーゴ, Yūgo?) is an avatar based on Yuugo Kamishiro. Yuuko uses it when acting as Zaxon's leader. Many Hackers believe Yuugo and the Ghost of the White Boy are the same person.

The Yuugo avatar was given to Yuuko by Rie, and she first used it in Avalon Server.

In the "Yuuko and Yuugo" quest, when Yuuko decides to delete the Yuugo account, Yuugo starts acting on his own. He sends the girl an e-mail telling her to meet him in Avalon Server. After Yuuko and Aiba arrive, Yuugo reveals he is a program with a "virtual personality", and starts questioning why Yuuko wants to delete him. Machinedramon sides with him, as he thinks "Yuugo" is his real Partner, while the program notes RizeGreymon seems to have chosen Yuuko. 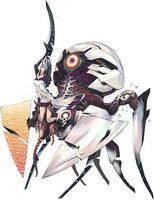 Eater Eve is the form Yuuko takes after being attacked and assimilated by an Eater in the Real World. Her body screams and struggles during the entire fight.

While rendered prone in the Real World by Rie Kishibe and reeling from the revelations that are shaking her to her very core, Yuuko is attacked and assimilated by an Eater once Rie's plan to open a portal to the Digital World has been realized. Though the physical form can be defeated, doing so would kill Yuuko, so Aiba uses their Connect Jump to enter what is essentially Yuuko's soul space. There, with the help of Fei Wong Tomoe Ignacio's TigerVespamon, Aiba reassures Yuuko enough to decide to fight on. This action allows Yuuko to regain control of her body, returning her to her human form.