Yoshi is a young woman with light skin, short dark magenta hair and dark pink eyes. She wears a pink tank top with a round collar, light blue capri jeans, a brown belt with a large elliptic silver buckle, and white boots with coral soles, markings and laces.

Her DATS uniform consists of a hot pink-and-white half-sleeve jacket with two yellow upside down triangle marks on the chest, a short darker pink jumpsuit with a partially white collar underneath, a white belt with a light pink buckle, and high-heeled white boots.

After she returns from the Digital World and has her memory erased, she begins wearing a red shirt under a midriff-baring purple shirt with a wide white v-shaped collar. She also wears a small, short-sleeved blue denim jacket, blue jean shorts, a brown belt with a silver buckle, and white and tan high-heeled boots. She wears a light blue bracelet around her left wrist. Memory is the First Thing to Go!

Five years later, Yoshi's hair is a bit longer. As a police officer, she wears a light blue shirt with rolled up sleeves, two pockets on the front, black strips on the shoulders and a black bar over the left breast pocket with a silver insignia on the middle, as well as a blue tie, dark blue trousers and a dark blue peaked cap with a black visor and a dark gold cap badge. She still wears the light blue bracelet she wore five years ago. The Ultimate Farewell 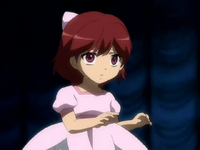 At eighteen years of age, Yoshi is the oldest member of the group, compared to Marcus Damon and Thomas H. Norstein, who are both fourteen years old. Yoshi is independent and sees herself as an older sister figure to her two teammates. Her catchphrase is "This is the worst" (最悪なんですけど, Saiaku nandesukedo?).

Despite her mature demeanor, she hides a terrible burden from her childhood and because of it, she has difficulty believing in her ability to do anything. When she was younger, Yoshino dealt with a severe inferiority complex which stems from being unable to be as good as her sisters at anything (the most noteworthy incident was a piano recital). As a result, years later, she still secretly worried about being useless to anyone. Lalamon had been aware of her suffering for some time and helped her to overcome it. The problem is revealed as the result of a trend where Yoshi and Lalamon would have problems during battles in the early part of the series.

Her partner is Lalamon, with whom she is quite friendly. Lalamon slowly says her name when she comes out of the Digivice, as "La...la...mon."

Name used in Digimon Savers and Japanese materials. It is also used in the English translation of Digimon World DS.

When the DATS Digimon had to go back to the Digital World, Yoshi and Lalamon spend their last day at an arcade but Yoshi accidentally destroys a punch game with her DNA charge. 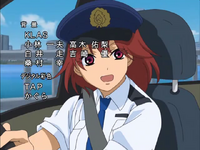 Five years later, Yoshi works as a police officer with Miki, Megumi, and Sampson. One day, she pursues an older Kouki Tsubasa, who is riding a motorcycle without a helmet.

In the "The Legendary Tamer" quest, Yoshi is a competitor in Exhibition 2 of the Legend Tournament. She and Rosemon Burst Mode fight alongside Keenan Crier and Ravemon Burst Mode. She mentions that she wants to hurry up so she can go get dumplings, and when she loses she uses her trademark line: "Oh, this is the worst!"

Yoshi is a legendary General whose partner is Rosemon.