DigimonWiki
Register
Don't have an account?
Sign In
Advertisement
in: All articles with unsourced statements, Locations in Digimon Adventure 02 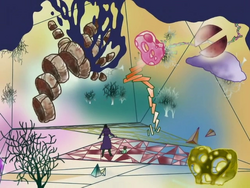 In Digimon Adventure 02, the world of dreams[1] is a world that has the power to transform dreams and emotions in reality. A Million Points of Light

Oikawa attempts to open a gate to the Digital World and take the Dark Spore children with him, using a program that replicates the keycards used by Myotismon. However, as a result of incorrectly using the Agumon card in place of the Gomamon card, as well as BlackWarGreymon having sealed the barrier between the World and Digital Worlds, the gate instead leads them to the world of dreams.[citation needed] The DigiDestined then follow them to this world. After Oikawa notices they aren't in the Digital World, MaloMyotismon leaves Oikawa's body and absorbs energy from the kids. He reveals that he has been controlling Oikawa since the night the children slew VenomMyotismon, and kills Mummymon and Arukenimon in cold blood. Although the DigiDestined are frightened by MaloMyotismon, Davis and ExVeemon don't give up and fight the Demon Lord. Oikawa's Shame Davis, blindly believing in their victory, manages to use the world's power, and ExVeemon becomes powerful enough to gain the upperhand against MaloMyotismon.

The world's power also allows all the DigiDestined's Digimon to take on multiple digivolved forms simultaneously. Imperialdramon Dragon Mode and Fighter Mode's "Double Positron Laser" ends up opening a portal to the Digital World, where the fight continues. The Last Temptation of the DigiDestined After MaloMyotismon's destruction, Oikawa, in his dying moments, uses the power of the world of dreams to transform his body and soul into energy to restore the highly damaged Digital World. A Million Points of Light