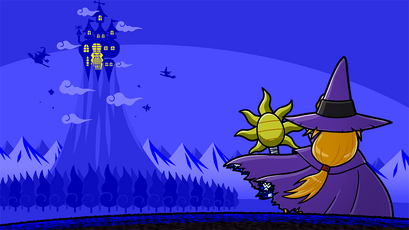 Witchelny (ウィッチェルニー, Wiccherunī?) is the Digital World of an alternate dimension based on the virtual pet Magical Witches.

The advanced programming language of Witchelny is known as Sorcery, and its practitioners populate the world. At the center of Witchelny lies Mount Brocken (ブロッケン山, Burokken-yama?), atop which is located a school of magic established by Witchelny's four clans for young Digimon to learn sorcery.[1][2] The area surrounding Mount Brocken is separated into four regions for each of the cardinal directions, and each region is inhabited by one of the clans representing the classical elements: Earthlin of the earth, Aquary of the waters, Eneruge of the flames, and Baluluna of the winds.[1] The land is ruled by the elders of each clan, as well as the three sage Digimon leading the council that governs said clans.[1] While most Digimon of Witchelny are from one of the four clans and have a Sorcerous affinity, some are born in the terra nullius.[1]

Digimon occasionally immigrate to[3] or from Witchelny, usually when they have mastered one or more elements at the school atop Mount Brocken and are looking to further their skills.[4][5][6] Perhaps due to this exchange, there are Digimon native to the traditional Digital World who have also mastered Sorcery.[7]

In ancient times, before the spread of Sorcery, Witchelny was particularly vulnerable to foreign invaders. Fortunately, MedievalGallantmon suddenly appeared and repelled the invaders, gaining it fame as Witchelny's "Legendary Hero". It now leads Witchelny's "Vortex Warriors", a group who fight using weapons made from wind sorcery.[8]

Before the World Ends

Wizardmon reveals to Gatomon that he comes from a different world from the Digital World, referring to Witchelny.[citation needed]

Wizardmon X came from Witchelny to help protect the Digital World. Courage from Another World[citation needed]