Moves may be copied from series.

Shoutmon is the main protagonist of the series. After defeating ?mon, Shoutmon's appearance has changed greatly due to the large amount of fighting he has done on his journey. Shoutmon is able to evolve into OmegaShoutmon a little easier then before, and became the Digimon King after defeating ?mon. After hearing of another being attempting to overthrow him, he goes out onto another journey to stop this being from taking over the world with an iron fist.

A Kotemon* is the main antagonist of the series. This Kotemon wishes to bring Zaros back into the Digital World so that he will rule it once again. He has multiple henchmen to carry out his deeds, and can digivolve into Musyamon if needed.

Astamon is one of Zaros' Generals. Astamon led Zaros' forces to victory until his god disappeared due to a rebellion. After Zaros' followers became persecuted, Astamon went into hiding from the other gods' followers until almost everything was forgotten by Zaros. Astamon wields the Oro Salmón, a machine gun that Zaros obtained from Vulcanusmon. Astamon is the most trusted by Zaros, so the Empty Lord tells him of his future plans. 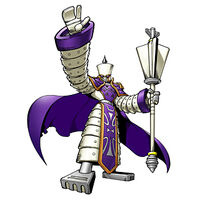 BishopChessmon oversees the Royal Capital, inhabited with PawnChessmons and RookChessmons. Digimon from other places come to the Royal Town to buy items, as the Chessmons here are well known for high-quality products.

RookChessmons serve as the Imperial Guard of the Royal Empire. They oversee the laws are obeyed by everyone.

Retrieved from "https://digimon.fandom.com/wiki/User:Funds/Series_III?oldid=489675"
Community content is available under CC-BY-SA unless otherwise noted.