The warriors are diverted in pursuing the Toucanmon when they decide to help a group of Gomamon, prevented from returning to their home due to whirlpools at the only entrance.

While the DigiDestined search for them, the Toucanmon become depressed that Ranamon turned ugly when she beast spirit evolved. They attempt to throw away the D-Tectors but then decide to sell them for money to other fans of Ranamon. As they fly to a nearby island, they are spotted by the children, and Takuya and Zoe chase after them until they are stopped by several Gomamon. They tell them that the water is dangerous because of whirlpools surrounding the Goma Island; they know this because they once lived there until Cherubimon began to destroy the world and have been separated from their home and friends ever since. The group initially decides to find a flying digimon to take them over to the island, but Zoe is moved by how sad the Gomamon seem and convinces her friends to help them. They build a raft and begin to approach the whirlpools, but Ranamon appears.

Zoe spirit evolves to hold her off while the others look for a way past the whirlpools. The two briefly fight, but Ranamon shoots down Kazemon, and she falls into a whirlpool. Just as she is beginning to lose hope, however, she finds she can breathe and a clam shell opens to reveal her beast spirit. She beast spirit evolves to Zephyrmon and begins to battle Ranamon again. Ranamon slide evolves to Calmaramon and gains the upper hand, but the boys call her ugly names and distract her, allowing Zephyrmon to defeat her. Calmaramon again attempts to use her Titanic Tempest, but just as before, she loses control and flies away. With Zoe's beast spirit now retrieved, the whirlpools have disappeared and the group is able to go to the island and the Gomamon are reunited with their friends. Unfortunately, they learn that the Toucanmon have already left for the Autumn Leaf Fair on another continent.

Oh my, WHYYYYY?!! You're pretty! Your beast spirit made you pretty!! Well, of course it's not like you're prettier than me! I mean, that's not even possible! But just because you are prettier than me doesn't mean anything, YOU GOT IT!?! Do you have adoring fans all over the world who worship you? I don't think so.

The blue nymph Digimon Ranamon is green with envy! 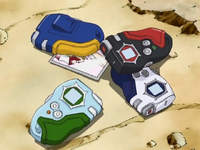 A photo of Zoe in the race queen-themed swimsuit