AutoWikiBrowser. Wikipedia has a good guide for how to install and use it.

Many of its appearances call it "God", although the null isn't confirmed to. Should we incorporate that in the lead, and if so, how do we differentiate the "God" who took Bagramon's right half?Now activating Project: SPIDERS EVERYWHERE 02:35, October 13, 2014 (UTC)

Why is this page called Yggdrasill and not King Drasil? Has Yggdrasill been dubbed to Yggrasill before? --Deviate85 20:47, January 29, 2012 (UTC)

Dawn/Dusk and digimon.net (the official page) use it, but I also wonder why we don't use the first anime dub, which I always thought outranked everything else. Anime... PAAWAA!!! 21:36, January 29, 2012 (UTC)

Honestly, because we interpreted King Drasil as only applying to the unique Data Squad version, and also because the name is asinine. There are certain things, like this, where enough is enough.Now activating Project: SPIDERS EVERYWHERE 21:58, January 29, 2012 (UTC)

To clarify, I want to make the argument that Digimon World 4, which includes pieces of Digital Monster X-Evolution, should count as far as establishing an anime name, but that's probably a very specious argument. Following that, would it make sense for "King Drasil" to only apply to the Spencer Damon avatar? Or do they use that name with other forms? I...really, really, really want to find an excuse not to use "King Drasil", because it just makes a mess of everything.Now activating Project: SPIDERS EVERYWHERE 18:06, October 2, 2014 (UTC)

You know, the name King Drasil is also used in Cyber Sleuth (with the terminal also being called King Drasil_7D6) and at least the Chinese version of Next 0rder (I still don't know if the American version also uses it). So, according to our rules, we should move the article. Anime... PAAWAA!!! 02:25, February 4, 2017 (UTC)

What is the true form of Yggdrasill? Some sources say that the crystalline woman, others talk about the ball. It could be that the Yggdrasill is in fact the ball on a pedestal in DM8 and others are avatars?

"Data Tree Yggdrasill" is the name used to refer to the tree in XWM, and 7D6 is clearly called an avatar by its profile. Yggdrasill Core's profile in the animation book does call it a "true form", but says that it is within 7D6, so it may be a Norn situation instead of the uttermost core of the true Yggdrasill. How do we want to handle the name of the tree, and do we want to call it a form, or the true form, or what?Now activating Project: SPIDERS EVERYWHERE 03:39, October 3, 2014 (UTC)

I didn't take that from Cyber Sleuth at all, actually. I thought that each Yggdrasill was linked to an instance of the Digital World in the multiverse... Eaters are closer to multiversal but are rather higher dimensional. Lanate (talk) 02:39, July 19, 2016 (UTC)

I may have misunderstood, then - I'm not actually getting a PS4 until Black Friday, so I won't have a truly informed opinion until then. If y'all think it's in the topic's best interests to cover as individuals, I'll step out of the way.Now activating Project: SPIDERS EVERYWHERE 15:08, July 25, 2016 (UTC)

So why is there pages for Data Squad KD and Adventure KD if we consider them the exact same KD? (which incidentally doesn't make much sense, unless he never learns his lesson and runs away to another Universe and fails every time) Cyber Sleuth have you fight 5/6 differnet 7D6 so I guess maybe the main KD isn't seen much and he sends different 7D6 to each universe and the real KD we've only seen so far in CSMarcusbwfc (talk) 19:41, July 9, 2018 (UTC)

I'd argue that King Drasil isn't a multiversal singularity, given that it is corrupted and rebooted in the course of Cyber Sleuth while only affecting that world, and it's shut down in Adventure. Do we have proof of Yggdrasill being the same being in each world? Lanate (talk) 02:42, July 10, 2018 (UTC)

I would count it as a species due to it being in the DRB as a Digimon, as well as featured in medals in CM and HM. I do agree that they shouldn't be considered the exact same King Drasil in every single universe though. At the least, the one from Data Squad is the same as the one from the Xros Wars Manga as it is mentioned as going rampant in the past and having to be shut down. Homeostatis is also there so it COULD be the Tri version but that would either a coincidence, or Tri referencing said manga. He gets killed in the X movie.

So it does seem that KD re awoke leading to the events of the Xros Wars Manga. The Re:Digitize game uses the events of the X movie and has X forms, so it appears the X KD appears for RD. From what I've read, the same Dorumon shows up and KD attempts to turn him into DeathXmon using his memories of the last X program. So even though he was killed in X, he appears to revive anyway and resurface in RD and this pic shows that he can't die and can just revive himself whenever

I don't think it makes sense simply because he seems to learn his lesson in Next, is shut down in two universes whilst isn't evil in Cyber Sleuth and is only evil there because Eaters are controlling him and such. The only way I can see it is if the 7D6 are used in other universes and don't share the same subconscious.

This video has Suedo talking about parrell worlds and such but that's to state as being where the Eaters are from and that they must never try to go there etc. What's interesting about this video is that it seems to talk about God. Suedo also mentions that Drasil is unable to remove Eaters from "every dimension", so if he WAS in all universes you'd figure he COULD do that (3:54)

This screen shows that DS has Omnipotent calculation power, whist the Eaters have the power of Ultradimensions 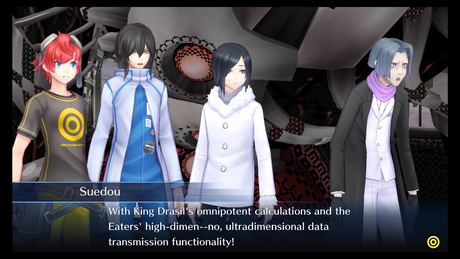 So I find what seems to be evidence of KD existing in multiple universes but whether it's the same one every time can't be certain it seems. I would count the X and Re:Digitize and the Data Squad and Xros Wars Manga versions to be the same character (meaning two KD)

I got my info from here, so you can have a browse through- https://vsbattles.wikia.com/wiki/User_blog:Executor_N0/Digimon_Franchise:_Yggdrasil_Respect_Thread#Space-Time_Manipulation.2FReality_Warping

But yeah, I think that the same events of "kill all humans" seems to happen too often over and over to be the same guy. Why wouldn't he learn his lesson? if it's the same character he's been killed and shut down multiple times as well as being taken over by Eaters and yet keeps trying to kill all humans (which doesn't seem possible since if he IS the same, he's aware of the countless human worlds since he's tried taking over multiple of them at this point). he also has multiple Royal Knights I guess? each time they're usually seen as THE RKs, rather than just "one set of RKs"

So it seems to be that it's the Eaters with the power of multiverse, with KD having the power of insanley powereful computing skills etc.

But yeah, I guess have a look through this guy's blog and see what comes from it but I don't get the idea of there being just one KD but maybe a few in shared universes.Marcusbwfc (talk) 04:56, July 10, 2018 (UTC)

Also, if it was the same in each universe it's a bit weird that the X forms are only in the X movie and RD, wouldn't all the other unvierses have them too because of 99% of all mons being murdered? there sure are a lot of normal Mons running around every other universes and not a single X mon. Mirei is in RD, CS, NO and HM and doesn't seem shocked there's thousands of normal Digimon running around in the CS and NO universes when 99% of them would be dead if it's the same.Marcusbwfc (talk) 05:00, July 10, 2018 (UTC)

My understanding was that there are multiple Yggdrassill avatars, one per each universe, sure, but that they have sort of a cross-dimensional hive link similar to the Seven Great Demon Lords. So, not one unified mind, but still essentially the same being in many different bodies. Is this accurate?Now activating Project: SPIDERS EVERYWHERE 15:37, July 10, 2018 (UTC)

You beat up like 6 of them in CS. I don't think they're the same mind simply because the same events have happened over and over and why would he use his Norn avatar in Next, learn to trust humans and then think now I suddenly hate them in Data Squad and Adventure and to want to kill them all. I think there's too many writers and series and such for it to be the same. The "idea" might be to have him the same in every single instance from say, the Xros Wars Manga universe but in practice I don't think it has been the case. There's no way to one from Adventure is the same one as the rest, he;s just evil for no reason what-so-ever in Tri, he was fair enough in his other evil appearances I do think it's possible he sends his avatars in different universes and we saw the real one in Cyber Sleuth though. I don't think they share memories or anything either because the events of the character can't really match upMarcusbwfc (talk) 17:44, July 10, 2018 (UTC)

As far as changing goals, by multiversal singularity I'm talking about the Transformers concept, where Primus, Unicron, etc. have avatars in each universe but are each one multiversal entity, and can have slightly differing representations in each universe. It would be like when Cortana in Halo 4 has different portions of herself focusing on different tasks, but is still the same overall entity.Now activating Project: SPIDERS EVERYWHERE 20:18, July 10, 2018 (UTC)

That probably is the case, though in that instance I think we should still treat them with separate articles and such per universe etc. I also think X counts for Re:Digitze (including Dorumon/Alphmon) and Data Squad counts for Xros Manga based on that blog post so I'm wondering on if we should count it for those. So I'm meaning to count this as a species page rather than a character page, cuz he does appear in the DRB as a Digimon after all.Marcusbwfc (talk) 20:29, July 10, 2018 (UTC)

Shouldn't we have it here? 7D6 is a mega digimon from the DRB and it's a species as you fight multiple of them in Cyber Slueth. We could make a 7D6 redirect and put it on that or just put it here. Id also include 7D6 on the big list of Digimon. So KD the entity is the lifeform multiversal but the 7D6 avatars it makes are Digimon.Marcusbwfc (talk) 12:53, November 13, 2018 (UTC)

Auto-Categorisation means we'd need to delete the info making the redirect redundant so I think either 7D6 gets an article of its own which wikimon does, with this as a character page, or just keep as is with the RD having the species th alongside a RD.Marcusbwfc (talk) 15:30, November 13, 2018 (UTC)

Actually we don't since Lanate built an off switch for auto-categorisation into template, all we have to do is change the cat parser from Digital Lifeform to None as I just did.

Neat. I figure we can't move over the level, type and attribute fields, though? (by that I meant remove it from the main page, but I suppose it doesn't matter too much) Also, I'm gonna rename it to King Drasil_7D6, as the _ is part of the name. edit: or not, I guess _7d6 and 7d6 are the same thing lmao. Also turns out that DID remove those fields, that doesn't show on mobile as theyre still there, weird.Marcusbwfc (talk) 20:24, November 13, 2018 (UTC)