DigimonWiki
Register
Don't have an account?
Sign In
Advertisement
in: Stub, Articles with section stubs, Partner Digimon,
and 2 more

ShootingStarmon
The Starmons, also known as Starmon and Pickmonz (スターモン＋ピックモンズ, Sutāmon + Pikkumonzu?), are members of the Fusion Fighters army in Digimon Fusion. The Starmons are composed of a corps of several Pickmon with a Starmon at their heart. The white Pickmon can spawn Chibickmon who answer to their orders.

Mikey Goes To Another World! He is Shoutmon, Hear Him Roar! A Rival Appears Island Zone in Chaos! Thanks for the DigiCards! Crisis or Conquest Danger Erupts! Meltdown in the Magma Zone! Dorulumon's True Colors The Rival Champions! Ice To See You, Angie! Treasure, Traps, and Trouble - Oh, My! Mikey, Warrior of the Light! Showdown in the Sand Zone Trouble in Paradise A Dark Cloud Over the Sky Zone Clash in the Clouds Welcome to the Jungle Zone! Rumble in the Jungle Zone! Train Of Terror! Disaster in the Dust Zone! Lost in Digital Space

ShootingStarmon is the DNA Digivolution of Starmon and the Pickmons.

As Starmon is dying from Tactimon's attack, Mikey reminds him of his promise to live to see the future of the Digital World. Starmon decides to keep fighting, and although he is unable to gather enough energy for Digivolution, he is able to DNA digivolve with the help of the Pickmons, and becomes ShootingStarmon. ShootingStarmon and Shoutmon EX6 attack Tactimon with their "Ryūsei Rock Damashī" combination technique, and finally defeat the Head Officer. Xros Stars!! Like a Shooting Star!! Afterwards, he degenerates back to the Starmons. Later, after ZeedMillenniummon is destroyed and releases UltimateChaosmon and a swarm of Megidramon and Argomon (Mega), the Starmons DNA digivolve once again, and ShootingStarmon helps fend them off alongside Shoutmon EX6 until they final xros with the rest of their allies into Shoutmon X7 Superior Mode. Xros Songs!! To All Youths Who Chase their Dreams!!

Starmon and the Pickmons take this form to help Shoutmon take down Pteramon and then to fake out MadLeomon (Orochimode). He is Shoutmon, Hear Him Roar!

Starmon and seven of the white Pickmons can digifuse into the golden Star Axe. It uses Shoutmon's mic as its hilt.

Starmon and the Pickmons take this form to help Shoutmon X2 take down Octomon. It is used many times in the Island Zone. Island Zone in Chaos!

Thanks for the DigiCards! Meltdown in the Magma Zone!

The Star Sword is the DigiFuse of Starmon and the silver Pickmons. It is usually transformed straight into the "Star Sword DX", which uses Shoutmon's mic as its hilt, creating a weapon for Shoutmon X4 and its related DigiFuses.

Crisis or Conquest Meltdown in the Magma Zone! 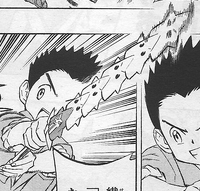