Luminamon
Shademon is a character in the Digimon Xros Wars manga series.

Shademon is a shapeless shadowy figure with multiple red eyes and a single yellow eye on her. 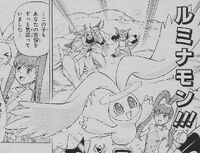 Luminamon is a white-furred, rabbit-like creature that wears a pink bodysuit and a golden halo.

Shademon (Nene Version) is a DigiFuse between Shademon and Nene, whom the former wraps around while covering the girl's chest, waist, left leg, right arm, and the right side of her face. She has a single, right-positioned black wing with multiple red eyes and a single yellow eye, and wears black shoes with and a black hairclip, with demonic wings on both. Nene's eyes become brown in this form.

Moon=Millenniummon is the form Shademon (Nene Version) takes after being absorbed into ZeedMillenniummon. It looks like most Moon=Millenniummon, but has a nude Nene inside the crystal, and the Darkness Loader connected to the floor by wires. Kotone describes it as "immodest". Xros Apocalypse!! The Beast of Revelation!!

It is unclear whether it is a digivolution from Shademon (Nene Version), or some form of DigiFuse with ZeedMillenniummon, although it is more likely to be a digivolution.