The Seven Great Demon Lords (七大魔王, Nana Dai Maō?), Seven Deadly Digimon, or Mao Digimon, are a group of Demon Lord Digimon who each represent one of the seven deadly sins. They are based on various demons from within Judeo-Christian mythology, a reference to Peter Binsfeld's classification of demons, most notably Paradise Lost[3] by John Milton and Clavicula Solomonis Regis,[4] an anonymous 17th-century grimoire. There are also two "Super Demon Lords" who are closely related to the group.

The Seven Great Demon Lords are the chief nobility of the Dark Area and each member has the right to command legions of the "Nightmare Soldiers", if they so wish.[5] They are also able to subvert the cycle of reincarnation presided over by Anubismon—instead of having the chance to be reborn, the data of their victims becomes their own flesh and blood.[6] Despite their might, certain other demonic Digimon, such as GranDracmon, are powerful enough to stand outside their authority.[7] Some other Demon Lords such as MaloMyotismon are rumored to be part of this group, but are not members.[8] The group has a natural rivalry with the Royal Knights.[9][please confirm]

Some of the species that are members of the Seven Great Demon Lords have also appeared as characters in other media, but are not members of the group.

Both of the Super Demon Lords (超魔王, Chou Maou?) wear the Crowns of the Seven Deadly Sins, are derived from the Beasts of Revelation, and digivolve from the Seven Great Demon Lords.[10]

Each of the Seven Great Demon Lords is associated with a corresponding "Crest" (紋章, Monshou?)[11], and this association becomes more prominent when they undergo X-Evolution, as their new forms incorporate their crest in some way into their design.

Each crest is displayed in one of the seven colors of the visible spectrum, and depicts a sigil of one of the "Seven Olympian Spirits", a group of mythological entities who, under God, ruled over the 196 provinces of Heaven and presided over the natural world for 490 years each.[12] Each Olympian Spirit is associated with a heavenly body, also depicted on the Crest.

Within the space between the two concentric circles is text stating a designated Level (this is "666" for all the crests, a reference to the "Number of the Beast" mentioned in the Book of Revelation), System (the demon that traditionally represents the Great Demon Lord's respective sin), and Code (the Great Demon Lord's respective sin). At the bottom of the inner circle is text which specifies a caution for a Purgatory Level ranging between 1 and 7, corresponding to the arrangement of Purgatory within Dante Alighieri's La Divina Commedia.

The structure of the text is in the following format:

Crown of the Seven Deadly Sins

The Crown of the Seven Deadly Sins (７つの大罪の冠, Nanatsu no Daizai no Kanmuri?) is composed of all seven Crests arranged in an array and is worn by both Super Demon Lords, Lucemon Shadowlord Mode and Ogudomon.

The Code Keys (コードキー, Kōdo Kī?) are mystical cards which appear in Digimon World Data Squad. Each of the seven cards is can be used to transform a child exhibiting a deadly sin into the Great Demon Lord matching the Crest depicted on the card. The DigiCode on the back of each Code Key reads "THE SEVEN GREAT DEMON LORDS" (

), while the front of the card is unique for each code key and is structured in the following format, also written in DigiCode:

"LUCEMON FM" and "DAEMON" are used for Lucemon and Creepymon, respectively.

Back of the Code Keys

Code Key of Pride
Add a photo to this gallery

The Gate of Deadly Sins (大罪の門, Daizai no Mon?) is engraved with seals depicting the Crests of the Seven Deadly Sins.

Towers of the Seven Deadly Sins

The Towers of the Seven Deadly Sins (七大罪の塔, Nanadaizai no Tou?) are mysterious buildings.

In Digimon Collectors they begin appearing across the Digital World and attract Digimon exhibiting their respective sin, as well as the Protagonist, who is sent to investigate them by the Royal Knights. Although the protagonist defeats the Great Demon Lords lurking within each tower, this only serves to bring about the manifestation of Ogudomon's tower, as well as the Super Demon Lord itself.

In Digimon World: Next Order, the Seven Deadly Digimon each create a tower out of boredom after having agreed not to fight each other, but the towers are soon destroyed by the Malevolent Fist.

Ogudomon's tower
Add a photo to this gallery

Mutant versions of the Seven Great Demon Lords protect high-level keycodes Hina Kurihara needs to analyze and take control of the data that prevents the linking of areas in the Digital World. Links proceeds to defeat them for the codes. Dragon's Light 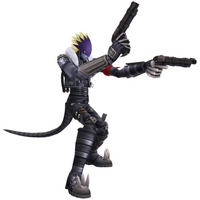 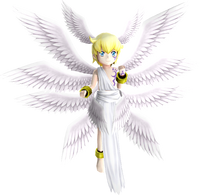 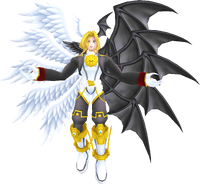 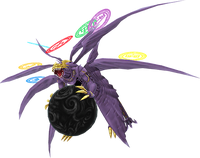 In the distant past, Lucemon started a rebellion in an attempt to destroy the Digital World and re-create it. Digivolving to Lucemon FM, Lucemon, with the help of Lilithmon, Creepymon, Barbamon, and various other evil Digimon, kill large amounts of Digimon, though eventually the Ten Legendary Warriors fight against Lucemon. Lucemon kills eight of them, though the remaining two successfully seal Lucemon away.

Lucemon FM is later freed due to the distortions caused by Spiral that the Royal Knights were attempting to seal. Lucemon is confronted by Omegamon, Alphamon, Examon, UlforceVeedramon, Magnamon, and Gallantmon; and Lucemon easily deals with all them. Alphamon realises that the only way they could take out Lucemon would be for all 13 Knights to attack at once, however the remaining members were busy fighting Mastemon. Not being able to re-convene to fight Lucemon, Gankoomon requests the help of the Protagonist to fight Lucemon in the missing members stead. During the fight, Lucemon FM warp digivolves to Lucemon SM. Alphamon then digivolves to Alphamon Ouryuken and proceeds to defeat Lucemon. 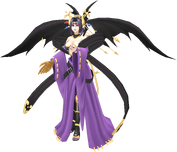 In the distant past, Lilithmon helped Lucemon in its rebellion. 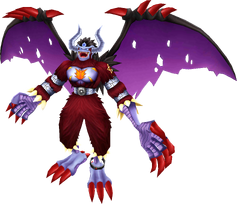 In the distant past, Creepymon helped Lucemon in its rebellion.

Years later, Creepymon wants to increase the amount of land it owns in the Digital World and so sends Goblimon and Raremon to get it said land. As they try to do so however, Beelzemon stops the duo, pissed off it was threatening weaker Digimon. This annoys Creepymon, who is surprised that a fellow member of the Seven Great Demon Lords would get in its way, so Creepymon tells its minion, SkullSatamon, to deal with Beelzemon. SkullSatamon has Goblimon and Raremon put up wanted posters of Beelzemon so that other Digimon would kill it to get it out of Creepymon's way. Beelzemon however, after deducing that Goblimon was too stupid to come up with this plan itself, would defeat SkullSatamon after Goblimon lets it slip that it was working for SkullSatamon, which then confirmed Creepymon was behind the entire plot. Beelzemon would spare SkullSatamon's life so that it could tell Creepymon that if it has a problem with Beelezmon, to come and deal with it itself - and after SkullSatamon relays the news, Creepymon decides to leave Beelzemon be for now... but that it will eventually get revenge over its fellow Demon Lord member. Path of Darkness 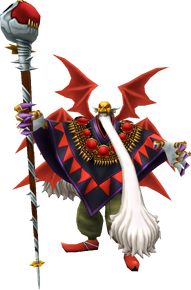 In the distant past, Barbamon helped Lucemon in its rebellion. 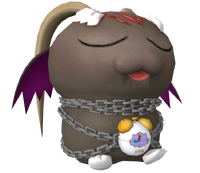 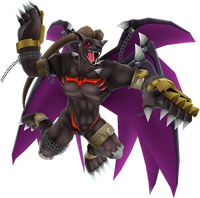 In the past, Belphemon was defeated by ShineGreymon and was sealed away. Clash Battle! Belphemon SM

Some time later, when ShineGreymon was training with Rasenmon and Angewomon, a group of Spiral-1004R spawn and manage to break Belphemon's seal, freeing it as Belphemon SM. Clash Battle! Belphemon SM The group attempt to attack SM whilst it's still dormant, however the Spiral keep getting in the way. As they fight against the Spiral, Belphemon SM's alarm clock suddenly sounds which awakens Belphemon SM and causes it to digivolve into Belphemon RM. Its roars were too much for Angewomon to handle, and they also cause Rasenmon large amounts of damage. ShineGreymon BM is eventually able to defeat and seal away Belphemon RM once again. Clash Battle! Belphemon RM

The Seven Great Demon Lords are seven Demon Lord Digimon that usually work on their own, however Lucemon plans to use the other six for its own goal of destroying every Digital World in existence. Lucemon, Daemon, Barbamon, Laylamon, and Beelzemon each acquired the X-Antibody for their own reasons, whilst Leviamon and Belphemon are forced to undergo X-Evolution by Lucemon after it awakens them from their slumber.

However this is exactly what Lucemon wanted, and after returning to the Dark Area to meet with Keramon X, which was part of its secret plan, Lucemon pulls the defeated Demon Lord's bodies into the Dark Area, then instructs Keramon X to warp digivolve to Diaboromon X, who then splits itself into seven and absorbs the defeated Demon Lords. Lucemon then allows itself to be absorbed as well, and the seven Diaboromon wield the Demon Lords as swords, attack the Royal Knights, and then eventually fuse together into Ogudomon X, with Lucemon acting as its consciousness. After Ogudomon X is killed by Jesmon GX the Seven Great Demon Lords are freed from the dying Ogudomon X's body, and use the last of their powers to escape back to the Dark Area.

Retrieved from "https://digimon.fandom.com/wiki/Seven_Great_Demon_Lords?oldid=535088"
Community content is available under CC-BY-SA unless otherwise noted.