DigimonWiki
Register
Don't have an account?
Sign In
Advertisement
in: Articles with section stubs, Humans, Characters in Data Squad
English

She has brown hair, just like her children Kristy and Marcus, and has her hair curled and put on her right shoulders. She also has olive-colored eyes. She wears a lavender shirt with a light yellow undershirt and a white knee-length skirt plus light brown shoes.

Sarah is Marcus and Kristy's kind caring mother, as well as Spencer Damon's wife. When she first appeared, she reacted somewhat casually to Agumon's presence, giving the impression that she was somewhat simple-minded. However, it was eventually revealed that she had been knowledgeable of the existence of Digimon for some time. Though kind and supportive of her son, she is somewhat fearful when he voiced that he had to go to the Digital World and stop the machinations of Kurata. Her memories of the family's time with Agumon were temporarily erased, but that seems to have been reversed. She later appears to give the former DATS team dinner, and is very dumbfounded when meeting BanchoLeomon for the first time. 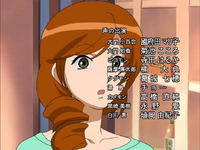