DigimonWiki
Register
Don't have an account?
Sign In
Advertisement
in: Articles with section stubs, Humans, Characters in Digimon Masters,
and 2 more

Dolphin
Dr. Rob McCoy (ロブ・マッコイ, Robu Makkoi?), also known as "Dolphin" (ドルフィン, Dorufin?), is a professor at Palo Alto University, and the man who began the project into the creation of artificial life that eventually spawned Digimon.

He is referred to as Doruphin in Digimon Masters.

In 1984, when he was an assistant professor at Palo Alto, he began an artificial life project, using drawings made by his son as a basis for his creature designs. McCoy was soon joined by students at the university—Janyu "Tao" Wong, Goro "Shibumi" Mizuno, Rai "Curly" Aishuwarya, "Babel" and "Daisy"—and together, they formed the group known as the Monster Makers. They successfully created primitive artificial lifeforms, but before they could proceed any further, their funding was cut and their project was shut down. However, the digital lifeforms accidentally found their way into the network's "Digital World", where they began to grow and flourish.

Roughly twenty years later, Dolphin and the other Monster Makers – sans Shibumi—were reunited by Yamaki and Hypnos, in order to learn more about Digimon, so that they could destroy them. However, when the Juggernaut system failed to destroy Vikaralamon, Yamaki was fired from his position.

Later, when Yamaki made contact with the Tamers, who had travelled to the Digital World to rescue Calumon from the Devas, he called Dolphin and the other Monster Makers together again so they could explain the situation to the kids' parents. Dolphin related the origins of Digimon to the confused parents, and then he and the others then started work on building an ark to bring the kids home. Dolphin was responsible for programming the ark, and used the code from the original Digimon core program, as it was the only way he could make it work. An attack by the D-Reaper on the Hypnos processor almost delayed their plans, but they were able to utilise the processing power of computers from all across the world to finish their calculations and send the ark into the Digital World to bring the children home. But it wasn't over – the D-Reaper followed the kids back through to Earth, and immediately infested the Shinjuku area, causing the Monster Makers and Hypnos staff to flee the building and set up a new temporary base of operations, where Shibumi joined them. Dolphin participated in a televised news report, explaining to the public about Digimon and their origins, and why they were not dangerous, and explained what the D-Reaper was. Footage was shown of him and his son, and of the many drawings his son made of different Digimon.

Meanwhile, however, Dolphin's granddaughter, Alice, had been given a mission by the Digimon Sovereign, along with her partner, Dobermon. As Dobermon delivered the power to Biomerge to the Tamers, and during the following battles, Dolphin lamented over a photo of himself, his son, and Alice.

When the ark, which had become sentient as a result of Dolphin's use of the Digimon code, contacted Yamaki via his computer, the Monster Makers decided to modify it into a "battle steed" to help the Tamers, turning it into Grani. It Bio-Emerged just in time to join the battle against the Optimizer. 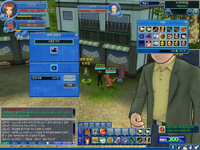