Richard Sampson is Marcus Damon, Thomas H. Norstein, Yoshino "Yoshi" Fujieda, Miki Kurosaki, and Megumi Shirakawa's superior officer, responsible for giving them orders and supervising all operations from the base. More often than not, his purpose was to delegate to his subordinates from the command center.

Sampson was a private investigator who worked with Homer Yushima. After investigating multiple missing persons cases, they came to learn that the disappearances were the result of the opening of numerous gates that led to the strange realm known as the Digital World. Sampson and Yushima joined an expedition into the Digital World, where they came to know Marcus's father, Spencer Damon. However, they were forced to return to the Human World without him. After this, Spencer managed to send Kudamon and Kamemon to the human world, as well as the data for the Data Link Digivice. Sampson then became the Commander of the Japanese branch of DATS. 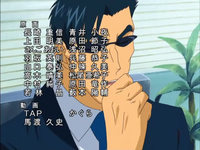 Sampson is an NPC.