DigimonWiki
Register
Don't have an account?
Sign In
Advertisement
in: Antagonists, Characters in Digimon Frontier, Articles with sourced attacks

View source
watch 01:36
We're Getting Mutants in the MCU - The Loop
Do you like this video?
Play Sound

Calmaramon
Ranamon is a fictional character and Digimon from the anime Digimon Frontier.

The name "Ranamon" refers only to the Human Hybrid form of this Digimon. Throughout the series, Ranamon gains the ability to spirit evolve into a number of other forms, each with a different name and special attack. The Human Hybrid, however, is her preferred form and the one she spends most of her time in. It is also the name she is most commonly referred to.

Ranamon is one of the successors to the Ten Legendary Warriors and is the Warrior of Water, the one who wields the Spirits of Water left behind by AncientMermaidmon. She is subverted by the fallen Cherubimon of the Celestial Digimon and fights to the detriment of the Digital World now. She has a strong affinity with the water, allowing her to control it with her will.

Ranamon has a very public idol personality which, combined with her cute looks, generates her a large following, with many Digimon such as the Toucanmon and the Honeybeemon as her fans. As a result, she develops a rivalry with Zoe who is very beautiful. To her enemies and with her other dark Warriors, she is vain, selfish, and remarkably cruel. Her Calmaramon form, on the other hand, is very ugly, and she lets her true personality bleed through in that form, which often alienates her fans.

After Grumblemon's loss to the DigiDestined, Ranamon joins him, Arbormon, and Mercurymon in a raid on Seraphimon's Castle. They interrupt the DigiDestined just after they successfully revive Seraphimon, only to be beaten down by the Celestial Digimon. Mercurymon's wiles allow him to defeat Seraphimon, but the DigiDestined manage to flee with Seraphimon's Digi-Egg. Better An Egg Than An Egg Shell Rather than follow, Ranamon and Mercurymon return to their hideout, where Mercurymon taunts her for not having her Beast Spirit. Angered but seeing his point, Ranamon rechecks her search pattern and realizes that there is a spot she missed. It happens to be close to the island with the Toucan Paradise and also where the DigiDestined end up after escaping the Blue Cave. Her Toucanmon fanclub has stolen everyone's D-Tectors except Zoe Orimoto's by this point, and so she gets into a one-on-one fight with Kazemon, Zoe's human Digimon form. At sea, Ranamon's powers are at their height, during their battle, Ranamon suddenly senses her Beast Spirit. She dives into the water and finds the Spirit, slide evolving into Calmaramon. Her new form outmatches Kazemon, but when she tries to use her Titanic Tempest attack, her unfamiliarity with the Spirit and lack of control as her spiraling off into the distance. Because of Calmaramon's ugly appearance and uncouth manners, she also loses her Toucanmon following. Beastie Girl

Frustrated by her lack of control, Calmaramon retreats to the dark Warriors' hideout, where she puts herself through intense training. Though doing immense damage to their location, she eventually gains some mastery over her new form, and she returns, as Ranamon, to challenge Zoe near the Goma Island. With their battlefield now completely over the water, Ranamon has the decisive advantage over Zoe. She batters her foe around with her control over the ocean and eventually attempts to drown her, but Zoe discovers the B Spirit of Wind at the seafloor and becomes Zephyrmon. Zephyrmon easily deals with Ranamon, but Calmaramon is stronger, and she manages to entrap Zephyrmon in her tentacles. The other DigiDestined begin spewing insults at her, and they distract Calmaramon just enough for Zephyrmon to get free and start dealing damage. Calmaramon attempts to use her Titanic Tempest once more, but it proves to be no better than her first attempt, leading her to fly off into the distance. The Swiss Family Digimon

After taking some time for herself, she, Arbormon, and Mercurymon have an audience with Cherubimon, where she is briefly chastised by her master. From Dawn To Duskmon In the aftermath of Duskmon's fight with the DigiDestined, Ranamon and Mercurymon take custody of Zoe, J.P. Shibayama, and Tommy Himi at the Old Castle. They have Datamon work on releasing the Spirits from the D-Tectors, and Ranamon begins some ultimately lighthearted torture to find where the remaining DigiDestined, Takuya Kanbara and Koji Minamoto, are. When she grows frustrated, however, she targets J.P. with her dissolving Dark Vapor, and Koji intervenes. Becoming Calmaramon, she and Mercurymon prove to be more than a match for Koji, who is still suffering from his injuries from Duskmon. Takuya, as Agunimon and having returned from a soul-searching journey, interrupts the battle and frees the other DigiDestined. After becoming extremely self-aware, Agunimon becomes in tune with the Digital World and with his own powers, and he spreads this knowledge to the others, which allows them to drive off Calmaramon and Mercurymon. Hurt but alive, Ranamon questions how they will now fight the more powerful DigiDestined. Mercurymon tells her that he has a plan. Sockit Takuya

Ranamon becomes the guardian of Mercurymon's Beast Spirit's, Sakkakumon's, Water Area, where she relaxes with her Honeybeemon fans. She orders her Honeybeemon to lay traps for Zoe when she arrives, culminating in a poisoned apple which brings to mind all of Zoe's feelings of ostracization. Ranamon drives the wedge of Zoe's fears even deeper with comments about her lack of friends, but then Zoe comes to a realization about herself. Acknowledging her own weaknesses, Zoe begins to fight back, and her kindness even draws the Honeybeemon to her side. After a fierce battle, she ends up losing to Zoe and her conviction. Ranamon is scanned and purified with her Spirits taken. Zoe's Unbeelievable Adventure

Later, when the Royal Knights attack the Village of Beginnings, a purified Ranamon's Digi-Egg briefly takes on Ranamon's astral form and attempts to protect the children of the future. For the first time in a long while, the ten Warriors stand together and work to drive off the Royal Knights, though the Village is lost. The purified Warriors acknowledge those who defeated them, and Ranamon's Digi-Egg returns to the batch being saved by the Trailmon, atoning for their past. Glean Eggs And Scram 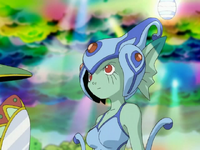 After being purified, Ranamon's Digi-Egg briefly appears to try to protect the Village of Beginnings from the Royal Knights. Glean Eggs And Scram

Calmaramon is Ranamon's Beast form, which she undertakes when she slide evolves using the B Spirit of Water. She is Ranamon's raw power form, trading her ability to manipulate water for crushing physical attacks and acidic ink. Calmaramon is noticeably uglier than her Ranamon appearance, and Ranamon allows her true personality to bleed through in this form, so she often loses her fanclub members once they see her as Calmaramon.

Unlike most of her allies, Ranamon doesn't have her Beast Spirit by the time the DigiDestined begin their journey in spite of a large scale search effort. After Seraphimon's defeat at his castle, Ranamon notices a spot she overlooked and heads to the Toucan Paradise island. The DigiDestined are already present there, so Ranamon begins a fight with the only battle-capable Warrior when she gets a reaction from her Beast Spirit. Ranamon dives into the sea and finds the B Spirit of Water in a sunken ship and becomes Calmaramon for the first time. Like most wielders, she is unable to completely control her Spirit at first use, and when she tries to use her Titanic Tempest, she spirals off into the distance. Beastie Girl Though she trains herself, Calmaramon is unable to completely use her form in the next battle The Swiss Family Digimon but grows to master it by the time she faces the DigiDestined again on the Continent of Darkness. Sockit Takuya At that point, the DigiDestined have outstripped her in power, and after one final confrontation in Sakkakumon's Water Area, Calmaramon decisively loses to Zephyrmon and loses her Beast Spirit as well as her life to Zoe Orimoto. Zoe's Unbeelievable Adventure