Racemon is a racing Appmon.

Racemon appears as a cross between a racer, a turtle, and a rabbit possibly as a reference to the fable of
the Tortoise and the Hare
. It wears a green racing suit with gray sleeves, and red gloves, as well as a white helmet with pink horns resembling both car headlights, and with a yellow stripe and star going down the middle, both of which have a red outline. Like most Appmon, it has two cables to enable Applink though they act as tails.

Official romanization given by Digimon Universe: Appli Monsters and used in the franchise. 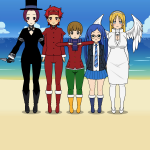 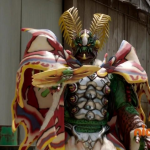