DigimonWiki
Register
Don't have an account?
Sign In
Advertisement
in: Partner Digimon, Antagonists, Characters in Digimon Next

Peckmon is a black-winged bird Digimon who first appears when deleting Kondoo's Raremon at the command of Knight. He is an Illegal type, one who has the Mu symbol (a hexagon) on his body—later revealed to be a DigiMemory, the Bird DigiMemory specifically.

Peckmon's prodigious speed, which Knight states to be faster than the Terminal can process, allows him to deal damage to Tsurugi Tatsuno's Greymon quickly, while his Protect ability similarly shields him from harm—up until the point that Tsurugi and Greymon's tenacity broke the shield. His Kunai Bane then disrupted the Battle Terminal's program, allowing him to use his deathblow, Spiral Claw, on Greymon without fear. He was then ordered to kill Tsurugi, but a cloaked figure intervened and teleported them away. Peckmon then returned with Knight, who was actually Shou Kahara, to report about his failure.

Peckmon continues to be at Shou's side, helping him out and ever loyal.

Pekcmon makes a cameo appearance with his Tamer as an opponent in Digimon World Dawn and Dusk's Legendary Tamer Quest. Here, it uses the design used in media other than Digimon Next.

Shou uses the Dark Digisoul to get Peckmon to this form. His Mikafutsu no Kami takes out a large area of the land and kills MegaKabuterimon easily. He assumes this form again against Tsurugi, where Crowmon opts to use Haguro to corrode the area. Even in this form, he retains the high speed which made Peckmon such a threat. But, convinced of Tsurugi's ability to help his Tamer, Crowmon steps aside to allow RizeGreymon the blow to break Shou's Black Digicore. 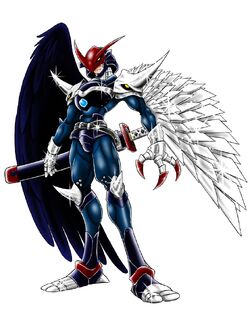 He first appears to save the group from Murmukusmon, who decided to end things. Using Burst Charge, Shou used his very life to empower Peckmon to this form. Once in this form, Shou reminds Murmukusmon of his past and then Ravemon blasts a hole through Murmukusmon, down straight to Norn and killing Norn's guard SkullSatamon with one blow.