DigimonWiki
Register
Don't have an account?
Sign In
Advertisement
in: Articles with section stubs, Translations to be checked, Partner Digimon,
and 2 more

Yuramon's Digi-Egg is light blue and is covered in pink spots.

In the Digivice: Virtual Pet, Yuramon can digivolve to Tanemon. 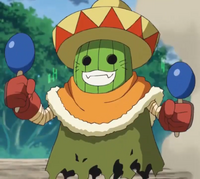 Ponchomon is one of Palmon's digivolved forms. Its level is listed by Toei Animation as ???.

It is a form resulting from an irregular digivolution triggered by a sonic attack that causes anomalies in Digimon.[2]

After witnessing Andromon defeating and shutting down Guardromon, Mimi's sorrow and anger causes Togemon to digivolve to Lillymon. Lillymon easily avoids all of Andromon's attacks and returns Andromon back to its normal self with its vines and petals. Andromon and Guardromon's unconscious body are then encased in moss, no longer able to move. Lilimon Blooms

While rescuing Tai, Agumon, Matt and Gabumon from several evil sea Digimon, Lillymon suddenly appears on WaruSeadramon's head and cracks its horn with her Flower Cannon. Break Through the Sea Monster Barricade

Palmon digivolves into Lillymon to fight against Groundramon, but her attacks have no more effect on the evil Digimon than the other Ultimates. After MetalGreymon Alterous Mode forces open Groundramon's mouth, Lillymon, MegaKabuterimon, Garudamon, Zudomon and WereGarurumon Sagittarius Mode fire their attacks down its throat, destroying Groundramon. To the New Continent

During the battle against Gogmamon, Mimi's fury at it causes Togemon digivolve into Lillymon who is initially unable to harm the evil Digimon and is no match for him. However, Mimi and Tai notice that Gogmamon spits out the diamonds that he eats, proving that he can't digest them. Mimi provides Lillymon with a diamond which Lillymon includes into her Flower Cannon attack, dubbing it Mimi's Determination. The attack blasts through Gogmamon's Curse Reflection and cracks his body. Declaring along with Mimi that Gogmamon is fired, Lillymon attacks with her Flower Drill which Gogmamon blocks with his crystalized right arm. Lillymon is able to drill through Gogmamon's weakened defense and destroy the evil Digimon, causing his minions to flee. Mimi-chan Wars