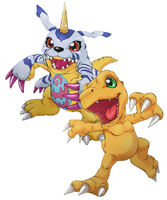 Agumon and Gabumon are Nokia's Partners.

One day, when running through Kowloon Lv.1, Agumon and Gabumon notice Nokia's presence and stop their way. They start running in circles around Nokia, who is astounded by their cuteness. As they introduce themselves, Nokia finds Agumon and Gabumon's names weird, while the two Digimon find Nokia's name weird. Agumon and Gabumon comment on Nokia's "nostagic" and "relieving" scent, whch the girl, embarassed, attributes to her "ero-cute pheromones". After Aiba approaches, the two Digimon run away, scared of the human. When an Eater tries to approach Nokia near the Logout Zone, Agumon and Gabumon show up to protect her. The two Digimon help Aiba fight the Eater, but all of their attacks are completely useless against the monster, and they get scared by the monster's strength. 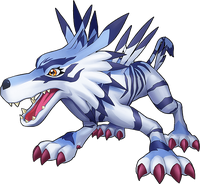 Greymon and Garurumon are Agumon and Gabumon's Champion forms respectively.

Nokia is the first customer of Sistermon Noir or Sistermon Ciel's and Sistermon Blanc's training gym, with the two sisters having hired Keisuke Amasawa to act as a lackey so that people would attend their training course, as they didn't want to be seen as "too cute and weak" to help train Digimon. Nokia fights Keisuke and the Sistermons, but Agumon and Gabumon wind up losing. After being scolded by Noir that she doesn't love her Digimon and merely stands in the background supporting them and Keisuke telling her to show her affection to her partners, Nokia responds that they're right and she is why they aren't strong. She then blows kisses to her partners, showing her love for them. Agumon and Gabumon don't seem to understand but say they're feeling happy and fuzzy which results in them digivolving into Greymon and Garurumon. The Sistermons then continue their training, slide evolving into their Awakened forms. They then instruct Keisuke to join Nokia's side and with Keisuke's help they defeat the Awakened Sistermon. Nokia expresses happiness that they're stronger but sadness that they're not as cute in their new forms, so Greymon and Garurumon willingly degenerate into their Rookie forms, because "those forms take more energy to sustain" and that playing with Nokia in those forms would be too dangerous. 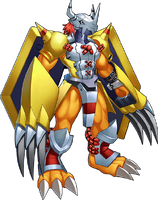 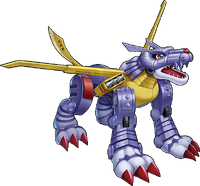