To watch over the Digital World

The Olympos XII (オリンポス十二神, Orinposu Jūnishin?)[3] are a group of twelve Mega-level Shaman (God Man) Digimon modeled after the Roman version of the Twelve Olympians, the "Dii Consentes". The Olympos XII manage the Digital World: Iliad, which exists on a different Server from the Digital World ruled by Yggdrasill; however, they possess ability rivaling that of the Royal Knights,[4] so the knights have not felt the need to personally interfere in Iliad's affairs.[5] The members of Olympos XII protect their own domains while maintaining a position of neutrality regarding the incidents which arise in the Digital World,[4] but some Digimon with a similar goal, like Plutomon, are excluded from their number due to their cruelty in its pursuit.[6] The forces that defy the will of the Olympos XII and oppose them in battle are never-ending,[7] to the point that the hatred of the Digimon they've defeated has been reborn as Titamon, who seeks to have their heads.[8]

The members of the Olympos XII resemble humans either wearing armor based on a specific animal or fused with an animal body. The group is central to the story of Digimon Heroes!, although members also appear in Digimon Data Squad, Digimon World Data Squad, Digimon Collectors, Digimon World: Next Order, and the card games. A Neptunemon, Marsmon, and Apollomon are also members of the Bagra Army, and a Mervamon is a member of the Fusion Fighters United Army in Digimon Fusion, although they are not stated to be members of the Olympos XII.

When Digimon World Re:Digitize: Decode was in development, the producer Kazumasa Habu requested Kenji Watanabe to design a Digimon that was both a member of the Olympos XII and Ogremon's Mega form. This Digimon was originally planned to be Bacchusmon and take design cues from the mythological Shuten-dōji, however, because it was hard to incorporate wine-based elements with Ogremon's design, the Digimon was redesigned to focus just on being Ogremon's Mega form, but they still wanted to connect it to the Olympos XII. Watanabe based this Digimon's relationship to the Olympos XII on Greek mythology, where the Twelve Olympians and the Titans were enemies, and, because Ogremon was "quite titan-ish", the Digimon was named Titamon.[9] 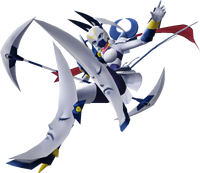 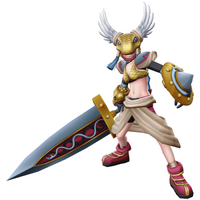 Minervamon is found in the Logic Volcano, and asks the Hero to deliver a gift to her fellow Olympos member, Dianamon, who is in the Frost Cathedral. After accepting the gift, Dianamon decides to send a letter in return to Minervamon, sending the tamer to deliver it. Minervamon then once again sends the tamer back to Dianamon with another gift, and Dianamon sends the tamer back to Minervamon with a gift as well. Upon opening Dianamon's gift, Minervamon is covered in water, and becomes enraged - assuming Dianamon was pranking her. Minervamon runs to the Frost Cathedral, arriving before the tamer, and during the duo's argument, Minervamon learns that Dianamon had carved her a sculpture made of ice - which melted due to the heat of the Logic Volcano, as well as the fact that Dianamon didn't like the gifts Minervamon had been sending. When the tamer tries to calm the two of them down, they attack the tamer in an attempt to murder them so they couldn't tell others of their argument. After their defeat, they come to their senses and join the City, joining the Colosseum where Minervamon works during the day and gives rewards if the tamer's Digimon have 100 discipline and 0 mood, whilst Dianamon works during the night and if the tamer's Digimon have 0 discipline and 100 mood.