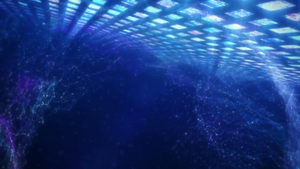 The Net Ocean (ネットの海, Netto no Umi?) is the world where the Appmon come from. It is part of the backstory of Digimon Universe App Monsters, and is equivalent to the Internet.

The Surface Web (サーフェスウェブ, Sāfesu Webu?) is the most surface part of the Net Ocean. It resembles an ocean, and is filled with many islands where each Appmon species live. The Net Ocean's islands are what humans call "servers". Dive into the Net Ocean! Follow Super Hacker Rei!

The Surface Web as depicted in the opening

The Reviewmon Island (レビューモンの島, Rebyūmon no Shima?) is the island where Reviewmon live. Kosomon either lives or visits the island. It has a forest with Review Flowers and two mountains.

A Message through "Time"—The Truth of the Appli Drive

On February 26, 2017, when chased by App Drivers, Mienumon orders Virusmon to lure them to Virus Island. Reclaim the 7code Appmon! Showdown—Ultimate VS Ultimate!

On February 26, 2017, Mienumon lures the App Drivers to Shooting Island, where they are attacked by Shotmon. Reclaim the 7code Appmon! Showdown—Ultimate VS Ultimate!

The Dante Gate Entrance[1] (ダンテ門前, Dante Monzen?) is on the bottom of the Surface Web. It is where a door to the Deep Web is. Only Dantemon can open this door, although Leviathan's underlings seem to be able to cross it.

In the anime, on February 26, 2017, Warudamon sees the Dante Gate Entrance, but is defeated before reaching it. Dive into the Net Ocean! Follow Super Hacker Rei!

In the manga, the App Drivers arrive at the Dante Gate Entrance, where they apprealize Dantemon, but before they can open the door, they are attacked by Mienumon, Satellamon, and Cometmon.

The Deep Web is under the Surface Web. It is connected to the Surface Web through a door in the Dante Gate Entrance. Reclaim the 7code Appmon! Showdown—Ultimate VS Ultimate! Minerva and Leviathan!!