Myotismon is a fictional character who serves as a major villain throughout several iterations of the Digimon Adventure continuity.

In the Japanese version of the anime, Myotismon refers to himself using "watashi" (私, "watashi"?), a very formal pronoun, but after becoming MaloMyotismon he uses "ore-sama" (俺様, "ore-sama"?), a very informal and somewhat arrogant pronoun.

Myotismon enforces loyalty among his servants by inflicting torture upon them as punishment for the smallest signs of rebellion, and sadistically executes even his most loyal servants should they fail in their tasks, or simply cease to be of use to him. DemiDevimon alone escapes relatively unscathed because of his loyalty and usefulness.

Myotismon feeds on the fresh or deleted data of his victims, though he develops a taste for human blood during his stay in Odaiba, causing his victims to appear to have been afflicted with sudden anemia.

His power is nullified in the sunlight, but he can overcome this by summoning a fog around his location, although its reach seems to have limits, as he is only able to isolate a city block rather than the entire town.

He has some measure of telekinetic ability, such as when halting and crushing a rock thrown at his head, and can block almost any attack with the aid of his magical abilities, unless it surprises him or is holy in nature. Even then, he is able to resist the attacks to a greater extent than other dark-based Digimon, such as Phantomon, one of his main servants. Even after being destroyed, Myotismon can re-establish himself if he recovers enough energy to make up for the damage received, absorbs massive amounts of data from external sources, and has some of his essence still remaining in an ethereal form.

Out of all enemies to the DigiDestined, he proves the most difficult to defeat of all the Ultimate Digimon they face, and rivals the evil Mega Digimon in both of his Mega-levelled forms.

Myotismon is created, along with Devimon and Etemon, by the initial period of chaos Apocalymon instills within the Digital World, and serves as one of the first real enemies of the DigiDestined.

Before he encounters the other DigiDestined, Myotismon finds Salamon, who later becomes Gatomon, and conditions her into a loyal minion through torture, given at the slightest sign of rebellion. He also becomes in charge of the castle where the Agents had once worked, which contains a gateway to the Real World. The Ultimate Clash

After the DigiDestined defeat Etemon and separate, Myotismon sends out his minion DemiDevimon to keep them separated while staying hidden himself, because he had learned of a prophecy that he would be destroyed by the eighth DigiDestined child. However, Tai starts pulling the group back together despite DemiDevimon's best efforts, for which Myotismon frequently punishes him.

When the kids are finally all reunited, Myotismon appears in person to fight them himself. He initially holds the upper hand against their Champion Digimon, until Sora unexpectedly awakens her Crest of Love, causing Birdramon to become Garudamon, who manages to hold him off long enough for everyone to escape. Sora's Crest of Love

He later enacts plans to enter the Real World, taking many of his henchmen with him, to find and kill the eighth DigiDestined child. The Gateway To Home However, the DigiDestined follow him, and for the next two days (August 1 and August 2), the two groups race to find the child. To his frustration, his minions prove unsuccessful in finding the child, and many of them are killed by the DigiDestined during their various searches.

On the night of August 2, Myotismon learns of Gatomon's relation to the eighth child. The Eighth Child Revealed He then uses his power to isolate Odaiba from the rest of Tokyo through a thick fog screen, which also serves to isolate some of the DigiDestined, making it harder for them to stop him. Flower Power

After identifying the eighth child as Tai's younger sister Kari, Myotismon easily overpowers the combined forces of the DigiDestined's partner Digimon, and aims an attack at Kari and Gatomon. Wizardmon sacrifices himself to save them. His brave sacrifice causes Kari's Crest of Light to awaken and give Gatomon the power to digivolve to Angewomon. She gathers the other Digimon's power using her Heaven's Charge, forms it into a Celestial Arrow, and slays Myotismon by firing it through his heart, just as in vampire mythology. Wizardmon's Gift

Despite this, Myotismon is not yet truly defeated, as straight after Myotismon's apparent defeat, Gennai sends Izzy and the other DigiDestined an e-mail detailing an ancient prophecy. The ancient text was translated by Gennai as follows:

The sky will be darkened by the wings of many bats.
The fallen people will invoke the name of the Undead Digimon King
And when the clock strikes the Hour of the Beast,
The Undead King will reveal himself in his true form, as the Beast.
Then angels will shoot arrows of Hope and Light at the loved ones of those they have been sent to protect
And a miracle will happen.

This prophecy comes to fruition through Myotismon's resurrection as VenomMyotismon, and his defeat at the hands of the newly warp digivolved WarGreymon and MetalGarurumon, with the help of the DigiDestined's Crests, used to hold the monster at bay so the two Digimon can deliver the final blow. Prophecy The Battle for Earth

However, only Myotismon's physical form is destroyed, and his data ghost survives, entering the body of Yukio Oikawa. Oikawa's Shame

On December 31, Myotismon is revived in his original form by Millenniummon. He kidnaps Kari, Joe, Matt and their Digimon, and takes them to the Server Continent. He is then defeated by Ryo Akiyama. Digimon Adventure: Anode/Cathode Tamer

From inside Oikawa, Myotismon secretly monitors and guides his host's machinations, only revealing himself when he has finished acquiring the energy to emerge from Oikawa's body, using the Dark Spores to fully restore himself as MaloMyotismon.

In "Vamdemon, the Castle of Darkness", the DigiDestined traverse Myotismon's castle and meet him in front of the gate between worlds.

In "Terror! BelialVamdemon", the DigiDestined come across Yukio Oikawa, who kills Arukenimon before transforming into MaloMyotismon. After his defeat, he draws the DigiDestined into the Dream Realm.

In "Our Digital World", the DigiDestined fight MaloMyotismon once more and defeat him for good.

For the most part, Myotismon plays the same role as in the anime. He features as a boss in chapters corresponding to the episodes "Sora's Crest of Love" and "Wizardmon's Gift", and as VenomMyotismon in "Prophecy"/"The Battle for Earth". Deviating from the anime plot, VenomMyotismon is also one of six past bosses that have to be fought again in the chapter corresponding to "Now Apocalymon".

Myotismon appears in Digimon Masters as part of the June 2019 Odaiba update, which follows the events from Digimon Adventure in which Myotismon tries to find the Eight Digidestined.

After his apparent death by Angewomon, Myotismon's bats consume the data of his remaining minions and merge with his mask, which is all that remains of him, and he is reborn as VenomMyotismon.

He begins by consuming DemiDevimon, revealing his mindless nature, and overpowers MetalGreymon and WereGarurumon until the two are able to assume their Mega forms, as the other DigiDestined partner Digimon arrive. Prophecy

VenomMyotismon gains the upper hand again after revealing his true form hidden in his crotch, but is then restrained by the DigiDestined's Crests, with WarGreymon and MetalGarurumon dealing the final blow. The Battle for Earth

A form that he assumed after leaving the body of Yukio Oikawa and absorbing the Dark Spores, the newly reborn MaloMyotismon tests his new powers out by torturing and killing his own minion Arukenimon, followed by the vengeful Mummymon. Oikawa's Shame

Though the DigiDestined are initially too cowed to fight MaloMyotismon, their courage is restored when Davis and ExVeemon attack. However, MaloMyotismon tries to end the fight by subjecting the humans to a Mental Illusion, entrapping each DigiDestined in a personal prison of their desires. Davis, whose desire is to defeat MaloMyotismon, is able to tap into the powers of the dream dimension, freeing his friends and showing them how to simultaneously manifest the different Digivolution forms of their partners at the same time.

Eventually the fight moves to the Digital World, where Myotismon uses its darkness to grow larger. The Last Temptation of the DigiDestined

Just as all hope seems lost, DigiDestined from all over the world use the light from their Digivices to empower their Digimon partners in the Digital World, before joining their partners and focusing their Digivices on MaloMyotismon.

From there, empowered by the Digivices, Imperialdramon Fighter Mode uses a fully-powered Giga Crusher to completely destroy Myotismon's essence, obliterating him for good. A Million Points of Light 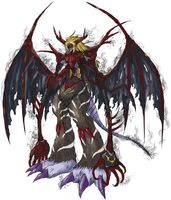