Mio is a teenage girl wirh short blonde hair and amber eyes. She wears pink hair ribbons, a pink dress with wrist-length sleeves, a flower-shaped turtleneck, and a pocket on each side of the waist. The dress is yellow on the hemlines, the end of each sleeve, and the opening of the pockets. She also wears white stockings, and blue, purple, and white sneakers.

Mio is Naoto's younger sister. She is attends Hifumigaoka Middle School and is friends with the Protagonist and Yukari. At some point she got sick.[1] Some time after recovering from sickness, she goes to the Protagonist's house, and tells them that Naoto is keeping some kind of secret from her. 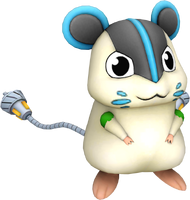 When Mio is being held hostage by Jammingmon, Tutomon delivers an App Drive to Mio, and becomes her Buddy Appmon. 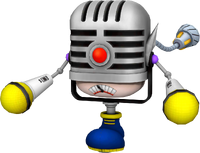 Recomon is one of Mio's Appmon.

When Mio receives her App Drive from Tutomon, Recomon becomes her Appmon.