DigimonWiki
Register
Don't have an account?
Sign In
Advertisement
in: Articles with unconfirmed statements, Articles with section stubs, Partner Digimon,
and 2 more

Mervamon is one of the larger Digimon at Nene's disposal, standing well over the young human.

From that moment on, Mervamon becomes one of Nene's most frequently used Digimon, and persistently protects her from harm. During the battle at the Digital Underworld, she develops a crush on Beelzemon, which he eventually reciprocates, is heartbroken after he sacrifices himself to finish off Evilbeast Laylamon, and is overjoyed when he is resurrected by Mikey's Code Crown. 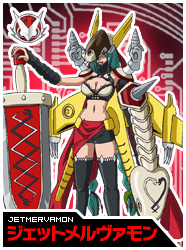 JetMervamon is the DigiFuse of Mervamon and Sparrowmon. Due to the DigiFuse of Sparrowmon, who soars soundlessly at Mach speed, and Mervamon, who excels in sword skill, she demonstrates authority in aerial battles. She is even able to deliver high speed attacks from the air, such as Mervamon's greatsword "Olympia Kai" (オリンピア改, Orinpia Kai?, lit. "Olympia Revision"), and the "Medullia" on her left arm which extends anywhere and swallows the opponent whole. Her attacks are powered up due to her toxic mist and glamor.[1]

JetMervamon is created when Mervamon accepts Nene Amano's help in knocking some sense into her brother Ignitemon. She is easily able to defeat GrandisKuwagamon Honeybee Mode. The Power Drain: The Hunters of Honey Land Afterward and with Mervamon's joining of the Fusion Fighters United Army, JetMervamon becomes Nene's main DigiFuse to field, as she enhances Mervamon's already considerable fighting prowess with Sparrowmon's speed and flight capabilities. Sweet Revenge! The Horrors of Honey Land! Ballistamon's Bad-News: Blast From the Past!

Nene Amano digifuses her to find and defeat Doumon, who cast an illusion on both Shoutmon X5B and MetalGreymon and was hiding. Ewan and The Land of Illusion