DigimonWiki
Register
Don't have an account?
Sign In
Advertisement
in: Antagonists, Characters in Digimon Frontier, Articles with sourced attacks

Mercurymon is a fictional character and Digimon from the anime and manhua Digimon Frontier. He is named "Mercurmon" in Chaung Yi's translation of the Digimon Frontier manhua.

Mercurymon is one of the successors to the Ten Legendary Warriors and is the Warrior of Steel, the one who wields the Spirits of Steel left behind by AncientWisemon. He is subverted by the fallen Cherubimon of the Celestial Digimon and fights to the detriment of the Digital World now. A trickster by nature, Mercurymon is devoted to long plans and has an affinity for polished surfaces, mirrors in particular, and he wields an "Irony no Tate" (イロニーの盾, Ironī no Tate?, lit. "Shield of Irony") on each arm.

Mercurymon is a planner by nature, which is only countered by his supreme arrogance and dramatic flair. He has total confidence in his abilities and uses them to plan long games into the future, and even though he feigns loyalty to his master, Mercurymon serves himself first and foremost, seeking out a path to his own supremacy. When in a position of power over his opponents, Mercurymon revels in their suffering, and likes to apply a theatric touch to their torture. He tends to speak in a Shakespearean dialect in the English dub.

After Grumblemon's loss to the DigiDestined, Mercurymon joins him, Arbormon, and Ranamon in a raid on Seraphimon's Castle. They interrupt the DigiDestined just after they successfully revive Seraphimon, only to be beaten down by the Celestial Digimon. Right before Seraphimon can strike the finishing blow, Mercurymon uses his teleportation and reflection abilities to turn back Seraphimon's attack against him, actually managing to defeat him. Mercurymon scans and takes Seraphimon's Fractal Code for himself, but Zoe Orimoto grabs the Digi-Egg left behind, and the DigiDestined flee. Better An Egg Than An Egg Shell Rather than follow, Mercurymon and Ranamon return to their hideout, where Mercurymon taunts Ranamon for not having her Beast Spirit, which leads to her starting up another search and finding it. Beastie Girl

After taking some time for himself, he, Arbormon, and Ranamon have an audience with Cherubimon, where Cherubimon makes it clear that he knows Mercurymon still possesses Seraphimon's fractal code and is only letting him hold onto it for now. Cursing his openness, Mercurymon gets into an argument with Duskmon, where the latter accuses him of being disloyal and Mercurymon calls him a coward for never setting foot on the battlefield. The exchange prompts Duskmon to go to the Continent of Darkness to face the DigiDestined himself. From Dawn To Duskmon In the aftermath of Duskmon's fight with the DigiDestined, Mercurymon and Ranamon take custody of Zoe, J.P. Shibayama, and Tommy Himi at the Old Castle. They have Datamon work on releasing the Spirits from the D-Tectors, and Ranamon begins some ultimately lighthearted torture to find where the remaining DigiDestined, Takuya Kanbara and Koji Minamoto, are. When the torture grows more serious, Koji intervenes. Mercurymon and Ranamon, now Calmaramon, prove to be more than a match for Koji, who is still suffering from his injuries from the battle with Duskmon. Takuya, as Agunimon and having returned from a soul-searching journey, interrupts the battle and frees the other DigiDestined. After achieving a new self-awareness, Agunimon becomes in tune with the Digital World and with his own powers, and he spreads this knowledge to the others, which allows them to drive off Mercurymon and Calmaramon. Hurt but alive, Mercurymon placates an angry Ranamon by saying that he has a plan. Sockit Takuya

Mercurymon uses his B Spirit of Steel to become the towering Sakkakumon. Pretending to be a dormant structure, he draws the DigiDestined inside of his ten spheres, where he attempts to break their spirits by inflicting psychological damage based on their past fears. Each of Sakkakumon's spheres contains its own elementally-themed area, guarded by a Digimon whose defeat allows the fighter to escape. Alone But Never Alone The DigiDestined eventually conquer themselves and the opponents within until Agunimon, Takuya's human spirit form, appears in the Steel Area, which Mercurymon himself is the guardian. Mercurymon's powers are at their peak in the Steel Area, where he has the capability to move between any polished surface—which the Steel Area is made up of nothing but.

Growing tired of playing, Mercurymon draws Agunimon into the Light Area, where he reveals that this is where he stores Seraphimon's fractal code. By taking the data within himself, he assumes a parody of Seraphimon's form and becomes ShadowSeraphimon, declaring his attempt to use this power to conquer the world. With his immense strength, ShadowSeraphimon beats down all opposition until he is torturing Takuya's human form. Seraphimon's Digi-Egg responds to Takuya's plight and the other DigiDestined's desperate attempts to breech Sakkakumon's defenses, granting him the power to fusion evolve to Aldamon. Aldamon is much stronger than either Agunimon or BurningGreymon, Takuya's beast form, and he easily defeats ShadowSeraphimon, taking back and returning Seraphimon's fractal code. Mercurymon retreats to the Steel Area, but Aldamon follows and uses his control over flame to melt all of the polished surfaces, preventing escape. Aldamon defeats Mercurymon and scans the H Spirit of Steel, winning release from Sakkakumon once and for all. Darkness Before the Dawn

In the future, when the Royal Knights attack the Village of Beginnings, Mercurymon's purified Digi-Egg briefly takes on Mercurymon's astral form and attempts to protect the children of the future. For the first time in a long while, the ten Warriors stand together and work to drive off the Royal Knights, though the Village is lost. The purified Warriors acknowledge those who defeated them, and Mercurymon's Digi-Egg returns to the batch being saved by the Trailmon, atoning for their past. Glean Eggs And Scram 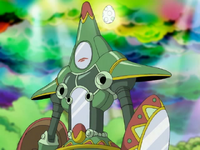 After being purified, Mercurymon's Digi-Egg briefly appears to try to protect the Village of Beginnings from the Royal Knights. Glean Eggs And Scram

Sakkakumon is Mercurymon's Beast form, which he undertakes when he uses the B Spirit of Steel. Unlike the other Warriors, he never slide evolves directly into Sakkakumon, and he can maintain both forms by using Sakkakumon on the outside and materializing his Mercurymon self within one of Sakkakumon's ten areas.

Each of Sakkakumon's ten spheres corresponds to one of the ten elements of the Ten Legendary Warriors and contains both an area and champion themed off of that element. A description of each of these areas can be found here.

Initially, Mercurymon uses Sakkakumon to entrap the DigiDestined within him to engage in psychological warfare. Alone But Never Alone When the DigiDestined escape, he reveals that he used the opportunity to analyze the other Warriors' fighting abilities, and Sakkakumon is now able to use their attacks. Essentially steamrolling over the DigiDestined, his weaknesses proves to be that he cannot deal with attacks of multiple elements and that he has to protect his central Tiferet sphere at all costs. Exploiting them allows the DigiDestined to win and purify Sakkakumon. Phantasmagoric Sakkakumon