DigimonWiki
Register
Don't have an account?
Sign In
Advertisement
in: Stub, All articles with unsourced statements, Articles with section stubs,
and 10 more
English

He is the first human lead of any Digimon anime serial, that doesn't wear goggles. Marcus is also the first human protagonist to physically hurt Digimon on a regular basis.

In the Japanese version, when referring to himself, Masaru adds "-sama" (様, "-sama"?) onto his name.

Marcus is a tall teenage boy with lightly tanned skin, shoulder length auburn hair and olive green eyes. His hair is usually tied back in a half-ponytail, with bangs framing the sides of his face. Marcus's civilian attire consists of a white shirt under an unbuttoned red shirt, blue jeans, and red sneakers with white laces and soles. He wears a rectangular silver pendant on a white string, given to him by his father. Father and Son Destiny

His DATS uniform consists of a dark blue-and-white half-sleeve jacket with two yellow upside down triangle marks on the chest, a red jumpsuit with a partially white collar underneath, a light grey belt, and white and dark blue knee-high boots. He wears his pendant around his neck along with his Digivice. The Return of Thomas!

While he is at school, Marcus wears the Ootori Municipal Middle School uniform, consisting of a red blazer over a white button-up shirt, a grey tie, grey pants and black shoes. Marcus' Inner Strength!

After he returns from the Digital World and has his memory erased, he begins wearing a black tank top, a red-and-white vest, khaki jeans with fake suspenders, black buckled wrist bands, and red sneakers with black laces and soles, as well as his pendant. Memory is the First Thing to Go!

As a four-year-old boy, Marcus's hair is short, messy and parted in the middle. He wears an orange short-sleeved hoodie, light blue jean shorts, white socks, and red shoes with grey laces and soles. Later, his father gives him his pendant.

Marcus is the kind of guy who would rather settle a dispute with his fists. He is loud and arrogant, and often rude and confrontational. However, his heart is in the right place. He is a caring and loyal friend, son and brother, who would protect his loved ones no matter what. He has a soft spot for children, stemming from his strong connection to his younger sister, Kristy. He considers himself to be an "ultimate fighter", but is also afraid of Yoshino Fujieda when she gets extremely angry.

Marcus isn't a good student, as he would rather fight or eat than study.

Name used in Digimon Savers and related materials. It is also used in the English translation of Digimon World DS.

Name used in the English dub of Digimon Data Squad and related materials. 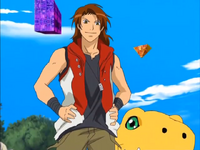 Many years ago, his father Spencer Damon leaves alongside Kurata and DATS members to explore the Digiworld, leaving Sarah to fend for herself with his sister Kristy.

In the present day, he accidentally met Agumon while the latter are lost in Human World, annoyed by the Digimon's wild nature, he fights it by fists, which ended in a draw and drawing admiration by the Digimon, calling him 'Big Brother'. Agumon follows him anywhere, even in his own house, shocking his mother, but accepts the Digimon in her home, despite his protests.

He became a member of DATS after meeting Yoshino "Yoshi" Fujieda and Thomas H. Norstein alongside their respective Digimon and forms an unstable team, with him and Thomas bickering among themselves, but united when facing challenges.

Kurata later hatches his vile plan, eliminating Digimon by deleting their data, and blackmailing Thomas into collaborating for him by he has the only cure for his sister's sickness. He later defeats Kurata merged with a Belphemon after reunited with his partner, who reverts into a DigiEgg after using its life force out of rage upon Norstein's betrayal, but retains Agumon's memory.

After defeating Kurata, he alongside Yoshino and Thomas must return to Digiworld to confront King Drasil for his actions, and to find his father. He later found his father held captive by Drasil. When the portal to Human World is closing, he saves his father and the rest of the human members of DATS, decided to stay in Digiworld with Agumon.

Marcus appears alongside Agumon on the Old Clock Shop Man's boat alongside Tai Kamiya, Davis Motomiya, Takato Matsuki, and Takuya Kanbara while punching his own fist. A Great Hunter Gathering! The Digimon Contest of the Southern Island! Marcus later reveals himself to Xros Heart alongside Tai, both of them appearing with their Agumons' respective Mega forms while helping give Tagiru Akashi the mindset to digivolve Arresterdramon into Superior Mode. While he and Tai leave without fully introducing themselves, Marcus expresses how impressed he is with the way Tagiru and Gumdramon fight. A Golden Bug! The Mystery of MetallifeKuwagamon

Marcus appears alongside ShineGreymon in Bagramon's tale. Xros Miracle!! Reel in a Sliver of Hope!!

One of the Digimon (varies depending upon the Player's available Digimon) on the Protagonist's Digi-Farm befriends Masaru, and informs the Protagonist that Masaru had left behind his Data Link Digivice, so the Protagonist returns the device to Masaru. Quest 06: Digivice Delivery

Later, when the Protagonist confronts a KingEtemon who had been stealing food from the Digi-Farm, Masaru rushes in to save them, digivolving Agumon to GeoGreymon to fight KingEtemon. Touma, Yoshino, MachGaogamon, and Lilamon show up to help intimidate the KingEtemon into surrendering the stolen food. Masaru and his friends inform the Protagonist that they are members of DATS, a secret police-like organization that busts evil Digimon in the Digital World and Real World. Quest 17: To Catch a Thief!

Later, when investigating a ghost sighting at Chrome Mine, the Protagonist runs into Masaru, who is also investigating the reports. They find a Bakemon who likes scaring others, and when Masaru confronts him, the Bakemon promises not to scare anyone anymore, so Masaru decides to let him go. Quest 31: A Ghost?

Once the Protagonist defeats Chronomon DM and becomes the Tamer King, they are challenged to a series of one-on-one duels by the revived Seven Great Demon Lords. The DATS team attempts to help defeat Belphemon at the Destroyed Belt, but are easily defeated by the empowered demon lord, wounding them in the process. Masaru continues to pursue Belphemon despite his injuries, so when the Protagonist arrives, Touma and Yoshino ask them to go after Masaru. The Protagonist is able to catch up to Masaru just before he reaches Belphemon, and Masaru encourages his friend to finish off the final demon lord. After the Protagonist successfully ends the threat of the Seven Great Demon Lords, Masaru and the rest of the grateful DATS team thank them and return to their headquarters. Quest 60: The Seven Demon Lords

Marcus is a competitor in Exhibition 3 of the Legend Tournament. He and ShineGreymon Burst Mode fight alongside Thomas H. Norstein and MirageGaogamon Burst Mode, who comment on Marcus acting before thinking. Union Quest 12: The Legendary Tamer

Marcus is a legendary General, whose Partner is ShineGreymon.

In the Digital Dungeon, Marcus punches Takuya Kanbara while the boy is one of his Digimon forms. Later, he and Agumon meet Taichi "Tai" Kamiya, Agumon, and Hackmon. Marcus and his Agumon mistake Tai's Agumon for a fake.

Taiga can fight Marcus and Agumon in the Colosseum. The first battle is the "I am Masaru Daimon" Free Battle in the DigiTower's 1F. Later, Taiga can fight them again in the "Man-to-man Battle" in 20F. This time, if Taiga defeats Agumon, Marcus will get angry that the boy has already defeated them twice, and attempts to fight. Growlmon tries to intervene, reminding Marcus that humans can't fight in the Colosseum, but Marcus punches the dragon, sending it flying to the reception. Marcus then notices the D.N.A. has apeared in his hand, and charges it, making Agumon digivolve to GeoGreymon. If GeoGreymon is defeated, Marcus will try to fight Taiga himself, but Agumon complains he's hungry. Although Marcus asks Agumon to wait, the Dinosaur insists that he can't wait any longer to eat, and the two leave. Taiga then receives the Agumon (2006) and GeoGreymon cards.

2
10
Marcus is a playable character. His unique Skill is "Bash", which deals damage to a targeted enemy.