Lopmon is a Rookie-level Animal Digimon, and is very similar in appearance to Terriermon.

While Terriermon is an over-confident sort, with the personality of a terrier-like dog, and tends to make sarcastic remarks, Lopmon is shy and polite.

In the original Japanese version, Lopmon and all of his evolutions are male. The reason he was written as female in the American dub was that it was difficult for the translators to discern Lopmon's intended gender due to his dialect; in the original version of Digimon Tamers, Antylamon and Lopmon speak with an antiquated dialect which uses gender-neutral pronouns, making his gender unclear, so the American dubbers leaned towards the latter as a result of his female voice actress.[please confirm] In a much later episode,[please confirm] Shaochung referred to Lopmon as a boy and tried to encourage him to use the modern male pronoun, "boku".

Lopmon is the Digimon partner of Suzie Wong, Henry Wong's little sister. However, Lopmon was also Antylamon of the Devas, and guardian of the South Gate to Zhuqiaomon's palace. When Suzie first meets Antylamon, she is treated as a small annoyance (albeit with kindness and patience), but after spending some time together, they develop a special bond. When Antylamon's fellow deva, Makuramon, appears and tried to harm Suzie, Antylamon drives him away. As punishment, Zhuqiaomon reverts Antylamon to Lopmon for protecting a human, and Lopmon became a partner to Suzie.

When the Tamers confronted Zhuqiaomon, Lopmon pleaded with Zhuqiaomon not to kill them. Regardless, he unleashed a blast of flame on Lopmon although in the end, she was saved by WarGrowlmon. Lopmon, like the other Tamer Digimon, went to the Real World. When the D-Reaper appeared, Lopmon regained the ability to digivolve to Antylamon to help out. Lopmon's only appearance during the final battle was when Kazu Shioda, Kenta Kitagawa, Guardromon, MarineAngemon and herself entered the D-Reaper to help. They arrived in one of MarineAngemon's bubbles just in time to rescue the recently de-digivolved Tamers and Digimon. Afterwards, Lopmon was forced to return to the Digital World with the rest of the Tamers' Digimon.

Lopmon returned in Runaway Locomon but as a more minor character. Lopmon's appearance was limited to her being accidentally taken by Henry instead of Terriermon (they were later switched back) and in the end when Lopmon and Suzie were threatened by two Parasimon which were destroyed by Beelzemon before anything could happen to them. Lopmon later attended Rika's birthday party.

When the D-Reaper was defeated, Lopmon De-Digivolved to Kokomon and was forced to return to the Digital World. Such Sweet Sorrow

In the virtual pet D-Power, Lopmon can digivolve to Turuiemon.[3]

Antylamon was originally one of the Devas (the Rabbit Deva), whose job was as guardian of the south gate leading to Zhuqiaomon's palace. When Antylamon met Suzie Wong, Antylamon grew to care about the girl and drove a fellow Deva Makuramon away. As punishment, Zhuqiaomon reverts Antylamon to Lopmon. Her arms turn into the "Bunny Blades" (宝斧 Bǎo Fǔ?, lit. "Treasure Axes").

During the D-Reaper's attack in the Real World, Lopmon digivolves back into Antylamon to help fight. It is not shown how Lopmon does this. It is clearly shown she digivolves back the second time with the only reaction being Suzie's digivice glowing. It is possible Lopmon got back the power to digivolve which was taken away by Zhuqiaomon when Lopmon became Suzie's partner. Lopmon first digivolves back to try to help the others and after seeing Beelzemon and Calumon fly to the Kernel Sphere, tries to help them. After Antylamon fails that she joins the battle against the Horn Striker Agent turning the tide of the battle by grabbing it's cord as it was about to eat Justimon, stopping it. Antylamon then holds it's cord still long enough for Justimon to cut it, destroying the agent. Lopmon again digivolves to Antylamon during Gallantmon and Beelzemon's attempt to rescue Jeri. Lopmon jumps out a window while digivolving and after Suzie uses the Radiant Glow Modify Card, and joins the battle destroying a bunch of Bubble Agents and saving Kazu, Kenta, Guardromon and MarineAngemon. 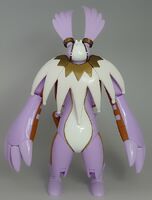