DigimonWiki
Register
Don't have an account?
Sign In
Advertisement
in: Articles with section stubs, Articles with unconfirmed statements, Characters in Digimon World,
and 5 more 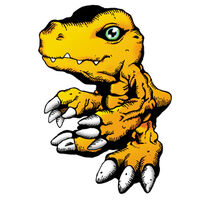 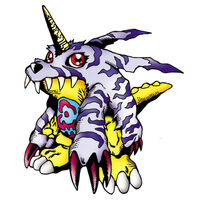 Mameo's Partner can be either an Agumon or Gabumon depending on the answers given to Jijimon. It meets Mameo after he arrives in the Digimon World. At some point, it digivolves into a Mamemon. Later, it goes to the Real World and calls Mameo back to defeat a revived Analogman. Digimon World

Years later, Mamemon has been infected by the BH Program at some point, and hibernates as a DigiEgg. After the defeat of Omegamon Alter-B Mamemon is reborn. Titamon's power allows Mameo to temporarily summon his partner from either the past of the future, to fight alongside his Mamemon, which in doing so summons a Machinedramon. The two proceed to fight against the Hero, though lose. Digimon World: Next Order

In Digimon World's Japanese version credits, a picture of Mameo with both Agumon and Gabumon is shown. 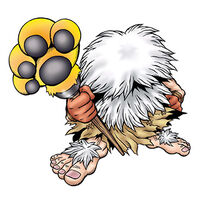 Many years later, Jijimon is kidnapped by the Blood Knights in File Island. Akira is given the job to rescue him from Giga Domain. After Port Domain, Scan Domain, Diode Domain, and Giga Domain are completed he rewards Akira with an Admantium Core, an item to upgrade Akira's digibeetle to Admant Body. Digimon World 2

Jijimon is briefly mentioned by Mameo, who explains to Takuto or Shiki that he and his World's Jijimon banished the Ice Sanctuary away due to the evil harboured in it and that he was surprised to see it had wound up in the Next Order Digital World as the "Frost Cathedral". Due to being friends with this Jijimon, Mameo was excited to befriend the Next Order's Jijimon as well. Digimon World: Next Order 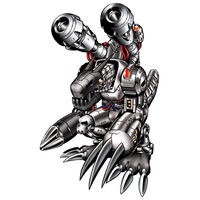 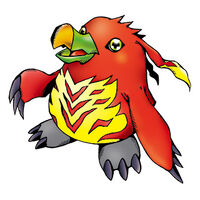 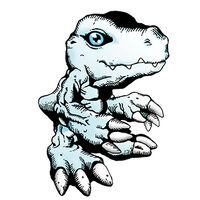 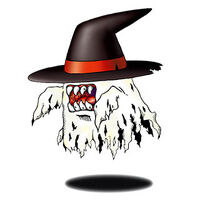 Machinedramon is Analogman's partner, who Mameo fights and defeats on Mount Infinity. Afterwards, Mameo can, once a month, go to the Back Dimension through Ogremon's Fortress in Great Canyon, Ice Sanctuary, or Grey Lord's Mansion. By traversing the Back Dimension successfully, Mameo faces a stronger version of Machinedramon. Defeating this Machinedramon, however, reveals it to be a regular Digimon (a Muchomon when accessed from Ogremon's Fortress, SnowAgumon from Ice Sanctuary, and Soulmon from Grey Lord's Mansion) merely corrupted into looking like Machinedramon by Analogman's lingering grudge. Jijimon congratulates Mameo on each victory with a "Chain Melon", while Mameo vows to deal with Machinedramon no matter how many times it comes back.

After beating it at Mountain Infinity, Machinedramon becomes a playable Digimon in two-player mode. Machinedramon's stats are the same stats as the Digimon Mameo uses to beat him at Mount Infinity, and the moves it uses are Thunder Justice (Thunderbolt in the EU version), All Range Beam, and Megaton Punch.

Mameo's mother. She left a note in the table saying she would arrive home late, and arrives home after her son comes back from the Digital World.

Two Market Managers (マーケット店主, Māketto Tenshu?) run a card shop and recycled item shop in Gear Savannah during the first half of each month. The items they sell in the recycled item shop are some of the items Mameo has lost as a result of losing battles. Another one also briefly appears outside the Drill Tunnel when Ogremon takes it over.

OverLord GAIA (オーバーロードＧＡＩＡ, Ōbārōdo GAIA?) is the main antagonist of Digimon World 2. He is actually the mother computer used in a project called "GAIA", which happened in the real world. Despite being just a machine, GAIA has the ability to think and act on his own.

Joy-Joy (リンリンシャオ, Rin Rin Shao?, lit. "Lin Lin Shao") is Bertran's best friend and is always around him, trying to calm him down when he gets frustrated with Akira. Despite her friendship to Bertain, she seems to be fairly kind with Akira, although she does get mad at him when he defeats her Digimon in the Colosseum. She is partnered with a Monzaemon, a Deramon, a Starmon, a Ninjamon, and a Raremon.

Kim (アユミ, Ayumi?) is a Tamer who infiltrates the city and steals the Generator Parts from the Tamer's Club. She is thought to be a villain, but after Akira defeats her Digimon in Modem Domain he discovers that she was only borrowing the Generator Parts for her sister to invent something new for the Digital World. In the ending, it seems she becomes attracted to Akira. She is partnered with a Wizardmon, a Seadramon, an Akatorimon, and an Ogremon.

Ben Oldman is the former leader of the Blue Falcons, went into hiding after the "Blood Knights Incident". He held the secret to reaching File Island. He is partnered with a Centarumon, a MetalMamemon, and a Meramon.

Techna-Donna (ドランドナ, Dorandona?) is Kim's sister, who gives Akira the Power Radar after he realizes that the standard radar isn't powerful enough for certain domains, specifically the Giga Domain.

Professor Piyotte (ヒョット博士, Hyotto-hakase?, lit. "Professor Hyotto") is an expert in Digimon DNA and knows a great deal about Digimon and DNA digivolution. Akira comes to the professor to ask him where the Archive Ship is. Later[please confirm], the professor informs Akira of three "Mega Form Digimon": the Virus-attribute Diaboromon, the Vaccine-attribute Omnimon, and the Data-attribute Baihumon, whom he cannot remember at first.[please confirm]

The Blood Knights (ブラッドナイツ, Buraddo Naitsu?) are a group of Guard Tamers who rebelled and started a war.

Damien (ダメダボース, Damedabōsu?) is a commander in the Blood Knights. He is often boastful but is constantly beaten by Akira. He tries to infiltrate the city by impersonating a Black Swords Tamer. He is partnered with a Cherrymon, an Etemon, a MegaKabuterimon (Blue), an Ogremon, a Puppetmon, and a RedVegiemon.

The Gold Hawks (シルバークロス, Shirubā Kurosu?, lit. "Silver Cross"), are a Guard Tamer group who specializes in Vaccine Digimon; their mascot is an Agumon.

Esmeralda (エスメラルダ, Esumeraruda?, Esp: Emerald) is a Gold Hawk Tamer who isn't very confident. Brian tries to comfort her, and she is also Akira's companion throughout the game. She is partnered with a Tentomon, a Biyomon, a Tapirmon, a Piddomon, a Unimon, and a Birdramon.

Mark Shultz (アークシュルツ, Āku Shurutsu?, lit. "Ark Shultz") is a Gold Hawk Tamer who tells Akira about a MetalGreymon in the BIOS Domain. Akira eventually befriends this MetalGreymon using the Toy Plane he gives Akira. He is partnered with a Saberdramon, a Gururumon, and a ShimaUnimon.

Brian Wiseman (ブランワイスマン, Buran Waisuman?, lit. "Bran Wiseman") is a high ranking Gold Hawk Tamer who seems to have a romantic interest in Esmeralda. He battles Akira in the Colosseum. He is partnered with a Garudamon, an AeroVeedramon, and a Mammothmon.

Cecilia (セシリア, Seshiria?) is the leader of the Blue Falcons and also the head trainer for students becoming Digimon Tamers. Akira joins her team after his last mission in becoming a Tamer is complete (canon to the story, but in-game Akira has the choice of joining the Black Swords or Gold Hawks). She is partnered with a Jijimon, a Magnadramon, and a MarineAngemon.

Debbie (ヴィーヴィ, Vīvi?, lit. "Vivi") is Blue Falcon Tamer who usually hangs around in the Tamer's Club, where she has her dancing Palmon that a Black Swords Tamer eventually falls in love with when Debbie leaves. She is partnered with a Palmon, a MoriShellmon, a JungleMojyamon, a Togemon, and three Mamemon.

The Black Swords (ブラックソード, Burakku Sōdo?) are a Guard Tamer group who specializes in Virus Digimon; their mascot is a DemiDevimon.

Skull (スカール, Sukāru?) is the leader of the Black Swords. He is partnered with a Hagurumon, a Puppetmon, and a DemiDevimon.

Sheena (オトタテシナ, Ototateshina?) is a Black Sword Tamer who isn't very confident and also informs Akira that Agumon was looking for him in the Digimon Trading Center. She is partnered with an Otamamon, a DemiDevimon, a Gazimon, a Gesomon, a Devimon, and a Guardromon.

Chris Connor (クロンガンダー, Kuron Gandā?, lit. "Chrome Gander") is a Black Sword Tamer who gives Akira a Toy Plane in the Digimon Trading Center. Later on, he goes to File Island and becomes confused by Gekomon in the Data Domain and mistakes Akira for an enemy. His partners are a Bakemon, Woodmon, Soulmon, Phantomon, Myotismon, Megadramon.

International Police S.A.P is an international police agency who fight against terrorism.

Dorumon, Agumon, Guilmon and Veemon are the main protagonists.

Dorumon's weapon specialty is Bash and it starts with the Bash Katana, Crush Arms, and Shot Pistols.

Agumon's weapon specialty is Blunt and it starts with the Blunt Axe, the Crush Arms, and the Shot Pistols.

Veemon's weapon specialty is Slash and it starts with the Slash Sword, Crush Arms, and Shot Pistols. Its first attack is "Petty Lightning".

Guilmon's weapon specialty is Stab and it starts with the Stab Dagger, the Crush Arms, and the Shot Pistols.

Leomon: A digimon commander of DSG who goes to investigate the mysterious Death Valley but is captured by evil digimon, later he is found in the Mecha Rogue X lab where his power is drained to create Mecha Rogue X1, he is saved but loses his memory of the operation.

Ophanimon is one of the Digimon chiefs of DSG who maintains order in the Digital World. Ophanimon is a male in this game.

Seraphimon is Ophanimon's partner and a Digimon chief of the DSG, he is reawakened by going into the freezer of DSG and turning on the computer. Seraphimon quickly fixes the system. Seraphimon is believed to be a Digimon of great power. He is wise and apparently knows a lot about Mecha Rogue X.

Mecha Rogue X is an experiment thought to be created by Yggdrasill.

In the card tournament, Ryuuji defeats Fuku Mitarai in the first battle, then defeats Mister O.B. in the third battle, and Yuusuke Kurayami in the final battle. 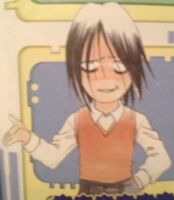 In the card tournament, Yuusuke defeats Naomi Gainsbourg in the second battle, then defeats Bakuzou Ooedo in the fourth battle, and loses to Ryuuji Terano in the final battle.

In the card tournament, Naomi loses against Yuusuke Kurayami in the second battle. 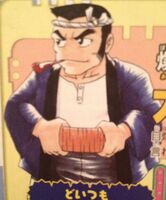 In the card tournament, Bakuzou loses against Yuusuke Kurayami in the fourth battle. 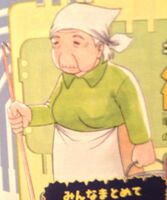 Fuku Mitarai (御手洗 フク, Mitarai Fuku?) is a character in the Digital Card Battle: Official Master Guide. She uses the Trashcan Scoop Deck (ゴミばこポイデック, Gomi Bako Poi Dekku?) and her main card is the Back Dimension. 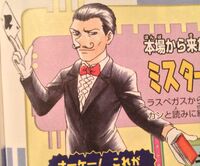 In the card tournament, O.B. loses against Ryuuji Terano in the third battle.