DigimonWiki
Register
Don't have an account?
Sign In
Advertisement
in: All articles with unsourced statements, Articles with section stubs, Characters in Digimon Ghost Game 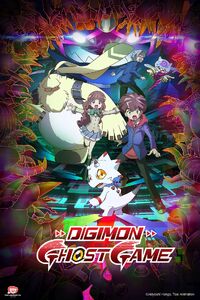 This is a list of characters from the Digimon anime series Digimon Ghost Game.

Originally a vicious Digimon who devoured the time of various humans under the Hologram Ghost identity of "The Sealed-Lip Man", Clockmon was the first Digimon that Hiro ever encountered. Following the second battle against Gammamon, Clockmon decided to cease his attack on humans and study under Bokomon to learn invisibility. When his Chrono Breaker ability struck Gammamon, a sinister shadow briefly appeared.

A bright scholar Digimon whom enjoyed researching the human world and bared various knowledge of the Digital World. He had a close relationship with Gammamon and Hiro who often sought knowledge about the Digital world or Digimon in general. He sacrificed himself to save Gammamon from Sealsdramon's dagger, which in turn awoke the darkness in Gammamon's heart.

A young protege of the scholar Bokomon, Tapirmon enjoys eating computer bugs and studying in the local library.