DigimonWiki
Register
Don't have an account?
Sign In
Advertisement
in: Stub, Articles with section stubs, Characters in Digimon D-Cyber

This is a list of characters from the Digimon manhua series Digimon D-Cyber.

The Holy Knights, who are equivalent to the Royal Knights in other media, are a group of thirteen Digimon who sealed away Dexmon's DigiCore 10,000 years before the humans arrived in the Digital World. With the spread of the virus, there are only three surviving knights, although Dorumon is later revealed to be the reincarnation of their lost leader, Alphamon. 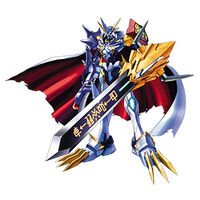 Omega, whose full title is "Omega of Power", is an Omnimon X and the acting leader of the Holy Knights.

When confronting his brainwashed friends Shēngjiàn and Huī, Zhìguāng ends up believing he has accidentally murdered Huī, and his grief causes Dorumon to digivolve to DexDoruGreymon and then DexDorugoramon as it battles to protect Zhìguāng from Shēngjiàn's Samudramon. Although the rampaging DexDorugoramon wins the battle, his Dexmon-like scent attracts the attention of Omega, who fears the return of his old foe. He accosts the humans for breaking the peace of the Digital World, ordering them to leave, then attacks DexDorugoramon. The commotion snaps Shēngjiàn free of his brainwashing, but Omega is unable to pacify DexDorugoramon, and quickly realizes that Zhìguāng is unintentionally transferring energy to his now-frenzied partner. When Omega moves to cut off the source of DexDorugoramon's power, and therefore Zhìguāng, Shēngjiàn implores Omega to hold, asserting that Zhìguāng can withdraw the energy and calm down his Digimon. However, just as Zhìguāng succeeds in pacifying his partner, who degenerates to Dorumon, MetalPhantomon appears to steal the Digimon's now-exposed Dragon Spirit, which he intends to use to revive Dexmon. Omega fails to prevent MetalPhantomon's escape, and before he leaves to hunt down the villain, he delivers the sad news that Dorumon will die in ten days unless the team can recieve a new Dragon Spirit from another Holy Knight, Duke. Shēngjiàn's Trap

Omega eventaully tracks down MetalPhantomon to the resting place of Dexmon's DigiCore, but is unable to prevent him from resurrecting the abomination, nor is he able to hold the beast off on his own. However, when Alphamon Ouryuken and the others arrive, he stands alongside them in the final battle, where they are victorious in defeating Dexmon. 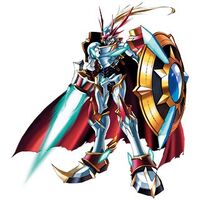 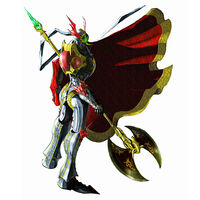 Duke, whose full title is "Duke of Courage", is a Gallantmon X who can slide evolve to a MedievalGallantmon.

Duke, who inhabits the Jade Waterfall in the Valley of the Morning Dragon, is the only one who can grant the Dragon Spirit, and when MetalPhantomon steals Dorumon's, Omega advises them to find Duke as the only way to save Dorumon's life. However, Duke will only receive visitors who have passed MameTyramon's ordeals. After passing the arduous tests, the team finally earn the right to see Duke, in his MedievalGallantmon form, only to learn that they must also defeat him in combat. After passing that test as well, Duke heals Dorumon and changes to his Gallantmon X form, then joins the fight against Dexmon. 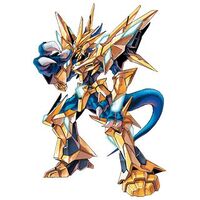 Magna, whose full title is "Magna of Miracles", is a Magnamon X.

Just before the final battle with Dexmon, Magna appears and uses his "Extreme Jihad" to bestow the power of his Digi-Egg of Miracles on Shēngjiàn and Huī, allowing their Digimon to fight alongside Alphamon. After the battle, he reuses this technique on Zhìguāng, to ensure he can make it home to the Real World.

MameTyramon is one of Dukemon's servants, and zealously protects his master, ensuring only the worthy earn the chance to speak to him. When his helmet is broken in battle, he only becomes faster and stronger.

MetalPhantomon was the "God of Death" who brought the Tamers to the Digital World in order to serve it. It brainwashed Huī Luò and Shēngjiàn Fāng into serving it, and stole Dorumon's Dragon Spirit in order to revive Dexmon. Unfortunately, Dexmon turned on MetalPhantomon and absorbed it, so Dexmon gained intelligence.

The final and main villain, the true form of the Digi-Core who was sealed away by the Holy Knights 10,000 years ago. He is revived by Metal Phantomon, and after absorbing the evil Digimon, gains power and the ability to think for himself. In the end, he fuses with the Digital World, forcing Alphamon to "purify him" and leave him in the center of the digital world.