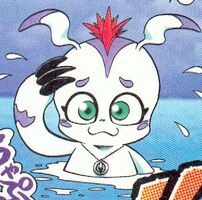 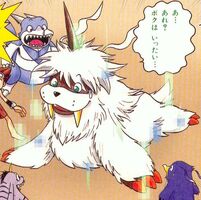 Gon (ゴン, Gon?) is a Gomamon who Taichi Yagami and the group meets after Zero's failed attempt at swimming. After being saved from a Gesomon, he is empowered to grow stronger himself. On Lord Whamon's orders, he brings Taichi and Zeromaru to him and witnesses Lord Whamon's death. Now named the protector of the Net Ocean, he aids Taichi and Zeromaru's fight with Lord Marine and is heavily damaged in return. After the battle, however, Gon digivolves to Ikkakumon instead of dying. He eventually returns to support Taichi in the defense against Neo Saiba.

Whamon is the protector of the Net Ocean, but by the time Daemon's army came, he was too weak to fight Marine, who had invaded his territory. Upon hearing of Taichi and Zeromaru's arrival, he asked Gon to bring them to him and explained to them the nature of the Digital World as well as his own status as a Support Program to aid Taichi. Bequeathing Taichi with the Digivice 01, he named Gon his successor as the protector of the Net Ocean and died soon after. Gon then retrieves his DigiEgg for safe keeping.

Starmon is the self-proclaimed star of Star City. Taichi Yagami and Zeromaru were challenged to a title-defense contest after Taichi and Zeromaru were treated as real stars for their battles against Daemon. There were two contests: beat a Gekomon in a singing contest and arm wrestle with a Tyrannomon. Zeromaru beat those with the help of Taichi's crazy doodles in his victory book. Taichi uplinked them to Zero and they won in unexpected ways. Lastly, they battle with Starmon in a speed battle for them to touch him in 3 minutes. Zeromaru won by gathering fans around himself for an autograph and making Starmon jealous. Starmon resigned, offering Taichi and Zeromaru the opportunity to come back as often as they wanted.

Jijimon is a Mega level digimon who is a renowned doctor in Hospitown. He appears numerous times over the course of the manga to lend medical help to the frequently injured Zeromaru. He is also knowledgeable about many facts concerning the bond between a Tamer and digimon as well as Zeromaru's existence as an Ancient type and the pros and cons of his overwrite ability.

Pal (パル, Paru?) and Pul (プル, Puru?) are a female and male PetitMamon who appeared in the later half of the series. The two helped Rei Saiba escape from Daemon's castle after they realized how insane Neo Saiba (from whom they had wanted an autograph) had become.

Gekovitch (ゲコビッチ, Gekobicchi?) is a ShogunGekomon who worked for Lord MagnaAngemon and was the 3rd opponent to Taichi Yagami and Zeromaru. His special attack is the Samurai Tone and he challenged the 100% Combination to break it. Though the attack uses sound waves hurt the enemy and form a barrier which dispels any attack, Taichi and Zeromaru manages to interfere with the sound waves generated by shattering a chandelier. Gekovitch witnessed the invasion within Lord MagnaAngemon's castle and wanted to stop his Lord from fighting against Arcadiamon.

Ninjamon is a member of MagnaAngemon's army. He worked as a spy and often brought information from Daemon's castle. He informed them that Arcadiamon had hatched and was also the one who told Taichi that Neo planned to attack Holy Angel Castle. However before he could go to the castle he was captured by Rosemon.

After Ninjamon recovered from his injuries, he proceeded to aid in the battle against Hideto's Omnimon.

Ghoulmon is the DNA digivolved form of Megadramon and the Guardian of the Tag of Sky, Cherrymon. As a Mega-level digimon, his very aura caused havoc around him and formed a time-space rift. He initially almost killed both Taichi and Zeromaru, but when Zero evolved into AeroVeedramon, he eventually lost in the resulting air battle and was killed when Zero unleashed his newest attack.

Etemonkey is an Etemon serving Daemon and portrayed as an antagonist for the first couple of chapters by setting up Ultimate Digimon to guard the five V-Tags. It was eventually revealed that he stayed under Daemon only for a chance to play with the humans and he has utterly no intentions of fighting for the human world. He is occasionally seen flown by several DemiDevimon or riding a Monochromon. He is eventually destroyed by Neo's SkullSatamon after Daemon accuses him of purposely losing to Taichi and Zeromaru.

Guarding the V-Tags necessary to enter Daemon's castle are five Ultimate Digimon sent by Etemonkey, however they all are eventually defeated by Taichi and Zeromaru.

The Guardian of the Tag of Earth, Triceramon is a Triceramon and the first Ultimate Digimon Taichi and Zeromaru truly face in battle on their quest to collect the five V-Tags. Though extremely strong, he eventually loses and realizes the hidden strength of having a Tamer: a Digimon with a Tamer can fight to his limit without worrying about dying afterward, because he has a Tamer to depend on. Guarding his domain are DarkTyrannomon and Deltamon.

The Guardian of the Tag of Sea, Marine (マリン, Marin?) is a MarineDevimon who invaded the Net Ocean. As the second of the Ultimate Digimon, Lord Marine forced an underwater battle with Taichi and Zeromaru, with his speed in his watery domain unparalleled. His prodigious speed, however, comes with the weakness of a low defense, as Taichi figures out when a bite from Gon lowers his health immensely. After tricking him into surfacing, Zeromaru finishes Lord Marine off with two good punches and Taichi claims the V-Tag of Sea. Among his followers are Gesomon and Octomon.

The Guardian of the Tag of Illusions, Myotismon, who sets up base in a spooky castle and is the third Ultimate Digimon Taichi and Zeromaru face. His plot included using a Patamon-disguised Bakemon to instill distrust between Taichi and Zeromaru and using the resulting doubt to brainwash Zeromaru. His plan failed, however, due to the bond between them. He is ultimately killed when Taichi trusted a blinded Zeromaru and let him fire a V Breath Arrow into Lord Vamdemon's face while he held Taichi. His forces include Bakemon, Candlemon, Devimon, Meramon, Kuwagamon, DemiDevimon and Kabuterimon.

The Guardian of the Tag of Sky is Cherrymon and, rather than fight Taichi and Zeromaru directly, he is used in a DNA Digivolution with Neo's Megadramon to form Ghoulmon. He is killed when Ghoulmon is defeated.

NeoDevimon are Ultimate Level Digimon who serve Daemon and, later, Neo. They are common soldiers who are faithful to their master, but do show the signs of a leader figure.

Three NeoDevimon worked for Neo and were sent by them to keep Hideto's wounded Omnimon at bay so that one other NeoDevimon could kill Zeromaru in his sleep. Zeromaru defeated two of them before Jijimon and Birdramon arrived. Callismon later revealed that Neo created the NeoDevimon based on Devimon.

Callismon was created by Neo when he used 10% of Arcadiamon's data on a Grizzlymon. When Callismon was presented to the other members of Daemon's army, he was able to smash a Devimon and an Ogremon and easily ripped a Boltmon into two. He is sent after Rei, who had escaped Daemon's castle. He quickly reaches and stuns her. However, Zeromaru turned up and fought against him. At first Callismon managed to hold himself very well against Zero, blocking his attacks and even dealing some damage to him. However Zero revealed that he was simply getting used to his stronger body and won the battle, finally destroying Callismon after a few good punches and his "V-Wing Blade" attack.

Ryo Akiyama and Taichi Yagami move to fight him, only to get into an argument with each other. It turns out that his weakness is the hot-blooded fervor both Ryo and Taichi readily display; as their argument heats up, Vikemon weakens until he is defeated. Hot Blooded!! The Great Sparkling Battle!!!

Parallelmon uses his dimension travelling powers to send Veemon and Davis Motomiya from the Adventure/02 continuity into the V-Tamer continuity, and absorbs Takeru "T.K." Takaishi, Kari Kamiya, Yolei Inoue and Cody Hida in the Adventure world. He then travels to the V-Tamer world and attacks Davis and Veemon, but the two are saved by Taichi Yagami and his partner Zeromaru. Since they are unable to destroy Parallelmon, the group has to flee and attack the monster again later. The other DigiDestined of the Adventure 02, along with many other Tamers who were absorbed by Parallelmon, work together from within the beast to recreate the Digi-Egg of Miracles, allowing Veemon to golden armor digivolve to Magnamon. In the meantime, Taichi and Davis come up with a plan to defeat Parallelmon. Zeromaru manages to behead Parallelmon but it is Magnamon who finally destroys him. Davis and Veemon are able to return to their world and everything returns to normal as before Parallelmon appeared. Double Tamer!! The Great Super-dimensional Battle!!

In this side story, Taichi and Zeromaru teamed up with Takuya Kanbara from the Frontier continuity to save Babamon's village from Metamormon. At first, Metamormon became an Imperialdramon Fighter Mode and attacked them. He later became Ghoulmon to fight Agunimon. When Agunimon Slide Evolved into BurningGreymon, Metamormon became Imperialdramon Fighter Mode again and attacked BurningGreymon while he was fighting with Zeromaru. With Takuya injured, Zeromaru had to fight Metamormon on his own. As Metamormon became Goldramon and continued the fight, Taichi and Zeromaru noticed that Metamormon's Memory System was in the device on his chest. Despite being injured, Takuya became Agunimon again and grabbed Metamormon until the shape-shifting Digimon became Agunimon, giving Zeromaru a hard time. The fake Agunimon attacked but Taichi and Agunimon came up with a plan. Agunimon launched himself towards Metamormon, then reverted back to his human form, which Metamormon was unable to mimic. Takuya then Spirit Evolved into BurningGreymon and defeated Metamormon. Zeromaru finished the job by slaying him. Metamormon is currently the fastest and one of the most powerful and one of the most dangerous Digimon of all time, even if he doesn't always show his full power or full speed. Frontier Generation 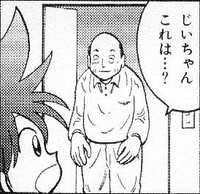 Taichi's grandfather had a friend who helped him a lot, and used to say "courage will give you wings to fly". This friend became a talented pilot, but died of a disease, and Taichi's grandfather kept his goggles as a reminder of him. After Taichi saw a friend being bullied and didn't know what to do, the grandfather gave him the "Goggles of Courage and Friendship". GOGGLES...

Retrieved from "https://digimon.fandom.com/wiki/List_of_characters_in_Digimon_Adventure_V-Tamer_01?oldid=508961"
Community content is available under CC-BY-SA unless otherwise noted.