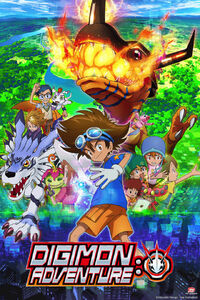 This is a list of characters from the Digimon anime series Digimon Adventure:.

Omnimon is the warp DNA digivolved form of Greymon and Garurumon.

After Greymon and Garurumon are defeated by the Mega form of Argomon they DNA digivolve into Omnimon. War Game

In August 2020, she is taking Hikari to a lesson. They transfer trains in Shibuya through the Tokyo Loop Line. Yuuko and Hikari are trapped in the train when Argomon causes the Loop Line's controls to malfunction. Tokyo Digital Crisis She is successfully able to disembark after the train stops. War Game

In August 2020, Miko is sleeping in one of the living room's couches. Tokyo Digital Crisis

A swarm of In-Training-level Argomon are born from Digi-Eggs in August 2020. They then spread through the Network and cause machines in Tokyo to malfunction. Some also attack Koromon. Among the incidents caused by them, the Tokyo Loop Line's control system malfunctions, prevent railway trains to stop on their stations. Taichi Yagami and Agumon fight the Argomon destroying them one by one, until a remaining one digivolves twice into its Champion form, causing one of the trains to speed up and enter collision course with the next train. It is destroyed by Greymon, causing the Loop Line's controls to return to normal and the emergency stop to be activated. Before they can celebrate however they learn that the American military network has been hacked. Tokyo Digital Crisis As Taichi, Greymon, Yamato Ishida, and Garurumon travel to that area in the Network they come across a large group of In-Training Argomon being lead by a Rookie Argomon. They clear out the In-Training Argomon, but the Rookie Argomon quickly digivolves twice into its Ultimate form, though through teamwork Greymon and Garurumon are able to defeat it while it is in its Worm Phase form. As they celebrate, Argomon digivolves once again into its Mega form. Time then runs out, and the Argomon's hack successfully launches a missile towards Tokyo as Argomon easily defeats Greymon and Garurumon. As all hope seems lost, Greymon and Garurumon suddenly warp DNA digivolve together to form Omnimon. War Game

Retrieved from "https://digimon.fandom.com/wiki/List_of_characters_in_Digimon_Adventure:?oldid=521101"
Community content is available under CC-BY-SA unless otherwise noted.