Leviathan (リヴァイアサン, Rivaiasan?) is a super artificial intelligence that lurks in the Dark Web. It is the "Last Boss AI" that aims to control the Real World by spreading the L-Virus, and turning all humans into Appmon chips.

In the manga, Leviathan's true form is that of a woman with a slim body, sharp toeless feet, which looks like she's wearing shoes, large breasts, long fingernails on her hands, and the Leviathan symbol on the left side of her face. She also has long hair, from which provide two demonic wings, four horns, and two serpentine heads. Leviathan also all seven Appmon type symbols floating around her.

In the anime, Leviathan's true form is a giant, jet-like five-headed dragon.

Leviathan is the "Last Boss AI" that lurks in the Dark Web. It aims to control the Real World by spreading the L-Virus through Appmon, making them rampage and mess with humanity's digital communications. The Suspicious Travel Guide! Navimon I Am! Cameramon works for Leviathan and reports to it that Haru Shinkai has obtained an App Drive. Search Result: Shinkai Haru! Gatchmon Appears! Gatchmon is so afraid of Leviathan that he freezes every time he pronounces its name. The Suspicious Travel Guide! Navimon I Am! According to Gatchmon's research, reuniting the 7code Appmon might release a power strong enough to defeat Leviathan. The Character I Leveled Up is Naked?! Ropuremon's School Dungeon! On October 31, Leviathan directly orders Cameramon to retrieve Haru's App Drive. He eventually fails, and Mienumon reports her retrieval of his Appmon Chip to Leviathan at Nakamura-Fujimizaka, with Sleepmon and Sakusimon in attendance. I'll Get You and Your Disguise Too! Caméramon's Halloween Scandal!

When team Haru confronted Rei for the third time, Rei revealed that Leviathan had kidnapped his younger brother, Hajime. After Sakusimon was defeated by DoGatchmon plus Raidramon, Sakusimon's information on Hajime was wiped out as his chip was taken by Mienumon, who then deemed him useless. Sakusimon—Defeat With Super Applink! However, after seeing Globemon, she then decided to try and form a fusion with Sakusimon in order to counter his power. The Net Ocean is in a Big Pinch! The "Time" has Come, Ultimate App Fusion!

It is later revealed that Leviathan was part of another AI called Minerva, and that it thought about breaking the rules in order to help humanity. So, it broke free, attacked its host, and escaped into the Net Ocean with Minerva. A Message through "Time"—The Truth of the Appli Drive

After Hajime is awakened, he explains to the Appli-Drivers Leviathan's true intentions: to initiate the Human Applification Project; a plot to permanently turn all of humanity into Appmon chips. Awaken, Sleepmon! Appmon Championships Again!! 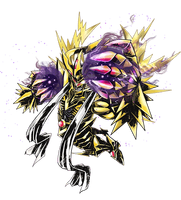