SaberLeomon
Leomon is a fictional character from the Digimon franchise. Courageous and noble and a firm believer that every living being has their own destiny to live out, Leomon is a master of the secret styles of martial arts. From his fist, he can summon a powerful flaming projectile known as the Fist of the Beast King.

Leomon is the Digimon partner of Jeri Katou. Before Bio-Emerging to the Real World, Leomon only knew of endless conflict. At first, he was a bit frightened by Jeri's affection and insistence that he's her partner. But he grew to care for her, becoming Jeri's partner for real after his near-death experience with Makuramon.

Despite Jeri's doubts of being worthy enough to be his Tamer, Leomon had much confidence in her. He once commented that she was such a little thing but she had a lion's heart, although this line is a dub exclusive. During the trip into the Digital World, Leomon did his best to protect his friends from the various threats they encountered there and brought an end to Orochimon's tyranny thanks to Jeri using a LadyDevimon Modify Card to give him the power to use her Darkness Wave attack. But things went downhill during the fierce battle with Beelzemon, as Leomon seized his arm to stop him from killing Kyubimon. Leomon informed the ranting Beelzemon that to simply have power did not make him strong – but Beelzemon retaliated by impaling Leomon through the chest with his claws. Leomon died and Beelzemon absorbed his data, with the aftermath being Jeri's depression that made her an ideal subject for the D-Reaper's research. His final words to Jeri were "Be brave, Jeri. A part of me will always be with you, remember you have a lion's heart." In the Japanese version he simply made a remark about fate, something he speaks of frequently in this version of the show. Jeri eventually overcame her sadness and remembering Leomon's words gave her the confidence to stand up to the D-Reaper. His spirit did seem to return to help at times: Beelzemon Blast Mode attempted to free Jeri from the Kernel Sphere and he finally broke in because suddenly he was able to call upon Leomon's Fist of the Beast King attack to break the Sphere. When he did this an image of Leomon appeared over him almost like his spirit was lending a hand. Also when Jeri started to regain her confidence she asked him a question and an image of him appeared on her Digivice and nodded at her.

In the virtual pet D-Power, Elecmon can digivolve to Leomon.[2]

In the virtual pet D-Power, Leomon can digivolve to GrapLeomon.[2] 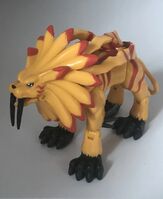