Leo is a Leomon who appears in the manga series Digimon Adventure V-Tamer 01.

Leo is a tall, muscular, bipedal lion carrying a sword at his waist.

Leo is a Leomon who works for MagnaAngemon at his castle where he trains young Digimon. However, he proves to be a rather brutal trainer, even beating his pupils if they don't succeed in their tasks. His attitude changes after he meets Tai Kamiya and his partner Zeromaru, especially after they fight his Kuwagamon and win. 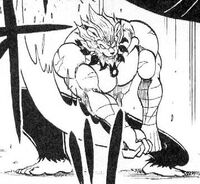 Leo later digivolves to IceLeomon some time before Tai goes to Hospitown. As IceLeomon, he fights and destroys Boltmon but is in trouble when he confronts VenomMyotismon. When he is able to gain the upper hand, he is attacked by Arcadiamon (Rookie), who rams his arm in Leo's side and siphons some of his data.

During Neo's second attack, Leo digivolves again to Regulumon to fight against Daemon's army alongside Dominimon and Omnimon.