Laylamon is one of the Three Generals of the Bagra Army in Digimon Fusion.

In an omake for first volume of Digimon Xros Wars (manga), she wears a tracksuit with a vertical stripe on each side of the pants and the jacket's sleeves, and sneakers, all of undetermined color.

Laylamon is an evil Digimon willing to achieve any goal at any cost. She excels at taming, reinforcing her might and proving her worth as a leader. She can lose her temper if angry enough. Laylamon claims 24 Zones of the Digital World. The only female and primary manipulator of the Bagra Army, Laylamon shares a place with Blastmon and Tactimon.

As one of the Three Generals, Laylamon oversees the progress of her commanders IceDevimon and Lucemon, and controls the feral Daipenmon, MachineDramon, and Arukadhimon.

After Mikey and his friends arrive in the Digital World, Laylamon observes MadLeomon's first failure against the Fusion Fighters, alongside the other Generals and Reapmon. Mikey Goes To Another World!

Laylamon first made her existence known to the Fusion Fighters when they arrived at the Lake Zone area she was in the process of conquering, using a mirror to manipulate Angie into stealing the Lake Zone Code Crown for her. However, her face is scarred by the Code Crown. Enraged, she forced the fusion of IceDevimon and Daipenmon, only to see it fall under the might of Shoutmon X4K. Ice To See You, Angie!

Laylamon led an attack on the Sand Zone, which wiped out the Warriors of the Light, save Reapmon. Learning the truth behind his sect's destruction, Reapmon attacks her, but is mortally wounded. He is later revived as Beelzemon and defeats her HiMachineDramon. Mikey, Warrior of the Light!

She sends Lucemon to conquer the Heaven Zone for her, even forming an alliance with AxeKnightmon to do it, only for him to be defeated by the newly-created Shoutmon X5, even after assuming his Lucemon Wild 2nd Mode form and drastically increase his strength. Clash in the Clouds

After Grandlocomon is slain, she personally forms a temporary alliance with the, somewhat confined, AxeKnightmon within the Dust Zone to defeat the Fusion Fighters, but her plan is foiled when Nene Amano joins Mikey Kudo and Christopher Aonuma is released from her partner's control and Blue Flare joins the fray to overpower the evil duo and is almost killed when AxeKnightmon absorbs SkullGreymon and SkullSatamon through his first use of the Darkness Loader. Disaster in the Dust Zone!

Laylamon's last major plot is to have Arukadhimon to get rid of the Fusion Fighters. However, the recent joining of Wisemon allows the heroes to defeat Arukadhimon, causing her to explode in anger before returning to the Bagra Fortress. Lost in Digital Space 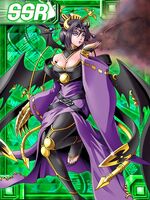 When Laylamon returns to Bagra HQ after destroying Sweets Zone, Bagramon uses his "Astral Snatcher" to put her soul into a Gekomon's body.

Unlike most DigiFuses, the component Digimon are able to make limited movements as well as physically speak to each other, often holding entire conversations.

Apollomon Whispered used his Darkness Loader to give Laylamon and Blastmon one final chance to get their revenge to Beelzemon and to destroy their enemies in the Digital World once and for all.