DigimonWiki
Register
Don't have an account?
Sign In
Advertisement
in: All articles with unsourced statements, Articles with section stubs, Partner Digimon,
and 4 more
English

Lalamon is a character in Digimon Data Squad. She is Yoshino "Yoshi" Fujieda's partner.

Lalamon is the partner of Yoshino "Yoshi" Fujieda, a female officer in DATS. She is a Digimon with a kind heart and a cute voice. Her partnership with Yoshi goes beyond the regular human-Digimon relationship as the two are best friends bonded by trust. Contrary to her partner, Lalamon is very responsible.[citation needed] The lullaby Lalamon sings during her Sing a Song technique is the same one Yoshi played during her piano recital as a child.

When DATS sends Yoshi to investigate the escape of "RAPTOR-1", Yoshi and Lalamon track the monster's signal to a public plaza, where they find Marcus Damon fist-fighting with Agumon. Lalamon breaks up the fight with her "Seed Blast" attack. THERE ARE MONSTERS AMONG US!

In the "The Legendary Tamer" quest, Rosemon Burst Mode and Yoshi fight alongside Keenan Crier and Ravemon Burst Mode in Exhibition 2 of the Legend Tournament. 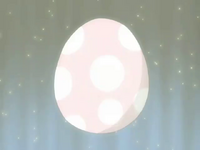 When Marcus and Yoshi discover that a Kunemon is behind the missing animals at Kristy Damon's school[citation needed], Yoshi digivolves Lalamon to Sunflowmon in order to defeat the bug. However, he digivolves to Flymon, and paralyzes Yoshi and Sunflowmon with his venomous sting, prompting Marcus to digivolve Agumon to GeoGreymon in order to protect them. Marcus' Inner Strength

Although she was recently ill with a Digital World sickness, Yoshi is able to digivolve Lalamon to her Ultimate form in order to fend off an attacking Mammothmon. Yoshi's Biggest Battle: The One with Herself

Rosemon's image appears when the DATS officers first use their D.N.A. Charges to strengthen their respective Ultimate-level partners in order to drive off the Bio-Hybrids, but this destroys their Data Link Digivices in the process. Digivice Meltdown However, after BanchoLeomon teaches the squad how to control their D.N.A. Charges, Yoshi is able to digivolve Lilamon to Rosemon for the first time, and the new Mega Digimon easily defeats Ivan in his Digimon form of BioStegomon. How to Fix a Broken Digivice While protecting the Sacred City from Akihiro Kurata's army, Yoshi uses Rosemon to fend off Ivan, who has returned and breached the walls in his new BioSupinomon form. After a long battle, Rosemon defeats BioSupinomon and forces him to revert back to Ivan and a Digi-Egg. The Sacred City's Last Stand!

In the Japanese version of Digimon Data Squad, Rosemon's Evolution montage is longer due to scenes focusing on Rosemon's breasts and buttocks.

Rosemon and Ravemon first achieve their Burst Modes while defending Japan from Leopardmon. After Ravemon Burst Mode roughs up Leopardmon, Rosemon Burst Mode finishes him off with her "Kiss of Breath". Justice Equals Power! Rosemon later digivolves to Burst Mode again in order to assist ShineGreymon Burst Mode and the other DATS Digimon against Craniamon. Human Potential!