DigimonWiki
Register
Don't have an account?
Sign In
Advertisement
in: Articles with section stubs, Tamers, Characters in Digimon Data Squad,
and 2 more
English

Kristy is a young girl with green eyes and short auburn hair which is worn in pigtails with yellow hair ties. She wears a pink shirt, a blue skirt, and red sandals.

In a commercial, she ties her hair with light pink hair ties, and wears a yellow shirt with a white collar, and a red zipped jacket with a white ruff on the collar.[2]

Kristy is a sweet, and kind girl. But does show moments of being angry or sad. Kristy is not usually seen being angry at Marcus, although there are times where she is seen to be a bit angry at Marcus. (Hence in one episode when Marcus's bad table manners embarrass her, she got very angry at him.) She also cares about Biyomon by telling him not to hurt people in his berserk personality.

She was immediately taken with and friendly towards Marcus's rival and friend Thomas, and it was her wish that he escort her and her mother on her birthday. A Birthday Kristy Will Never Forget!

Later, Kristy befriended a newly hatched Digimon who eventually became Biyomon, but this relationship ended when Biyomon was struck down, and later driven to madness after being revived. When her friend was finally defeated, Kristy was happy to know her friend no longer had to suffer. Later, her memories of her experiences with Digimon were apparently erased by the Confidentiality Ministry, but she seems to have regained them.

Later when the Digital World was falling from the sky the same Biyomon was transported to the Real world with a big group of baby Digimon. At first Biyomon could not remember who Kristy was, but when Kristy almost got hit by one of Leopardmon's missiles, Biyomon remembered everything and digivolved to Garudamon to save Kristy. Biyomon stayed with Kristy for the remainder of the series.

Kristy and Biyomon were both present in the battle against King Drasil. 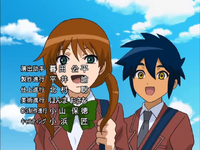 Five years later, Kristy goes to middle school with Keenan Crier. The pair of them meet with Yoshi and Yushima along the way to school one day. The Ultimate Farewell

Kristy is an NPC. In the English version she is mistakenly referred to as Marcus Damon's "brother".