Keenan is the partner of Falcomon.

Keenan is a young boy with tanned skin, messy dark blue hair, and yellow eyes. He keeps one lock of hair on the right side long, tying it with a red band. While living in the Digital World, he dresses in a pale yellow, sleeveless shirt, with loose orange shorts and a brown belt, brown wristbands, and sandals. He also wears a green cloak with three white and red feathers around the lip and white legwarmers. He wields a large red and white boomerang, and uses cyan warpaint on his face.

Five years after the battle with King Drasil, Keenan is a teenager, taller than he was as a child. He has stopped using warpaint, and cut the long lock of hair on his side, now wearing his hair even. He is shown wearing the Ootori Municipal Middle School uniform, consisting of a red blazer over a white button-up shirt, a grey tie, grey pants and black shoes.

As opposed to the other members of DATS, Marcus Damon, Yoshi Fujieda, and Thomas H. Norstein, Keenan did not live in the human world, nor did he originally have a particular liking for it. Though originally born on Earth to scientists Kevin Crier and Michelle Crier, he was accidentally transported to the Digital World as an infant, where he was raised by Frigimon and Merukimon.

Keenan, like most archetypal wild people, refers to himself with a "me" instead of an "I", despite the fact that the Digimon he grew up with have proper vocabulary. He believes in defending the peace of the Digital World, and also initially believes that humans are nothing but a threat to it. Despite his young age, Keenan has great fighting skill (many of his moves mirror the ninja-like aspects of Falcomon). He wields a boomerang, and wears a cape and a necklace adorned with feathers, and also has facepaint.

After Keenan was transported to the Digital World, he was raised by a Frigimon, and was protected by Falcomon. He was sickly as a young boy; at one point Frigimon went to find medicine left behind by humans that had been in the Digital World. But after nursing him back to health, the bigoted scientist Akihiro Kurata came to the Digital World to try and annihilate the Digimon in an act of genocide. Though Kurata was eventually defeated, he was able to destroy many Digimon, among them Keenan's Frigimon mother, who was destroyed before Keenan's very eyes while trying to protect him. This event was crucial to Keenan's hatred of humanity, as he came to believe that all humans were evil and became dedicated to defending the Digital World from them. From this point on, he was raised by Merukimon.

Keenan first appeared in the series' fourteenth episode, where he attacked the members of DATS as they emerged into the Digital World. His initial attack destroyed the equipment they had brought with them, effectively stranding them in the Digital World. To their surprise, he revealed that he had a Digivice, which he then used to help Falcomon digivolve into Peckmon. The two overwhelmed GeoGreymon, Gaogamon, and Sunflowmon, until their battle was interrupted by an angry Cherrymon, who was enraged by the fact that their battle was endangering the Nyokimon he was protecting. When Gotsumon, one of Merukimon's servants, began to rain massive rocks down on the area, Keenan and Peckmon fled.

They would later watch as the DATS members battled MetalPhantomon, but after he was defeated, they personally intervened. Keenan intended to attack Yoshi, who had fallen ill and contracted a virus, but Keenan instead contracted the virus himself. Falcomon forged an uneasy alliance with Thomas and Marcus to retrieve a vaccine, and saved his partner. He and Keenan later departed on their own. Keenan reveals the reason for his hatred of humans to Marcus in episode 17. A mysterious group of humans (later revealed to be Kurata and his strike force) destroyed his Digimon foster-mother, Frigimon, and he cannot forgive the humans for what they did. Believing himself to be a Digimon, he now attacks any human he comes across. However, while battling with the DATS members, he slowly gains a new perspective of humans, and is actually impressed with some of their kind and honorable acts. He is especially taken by Marcus, who seems to actually care for his well-being, despite their initial hostilities, and with his ideas of nobility and honor.

The events of episodes 18-19 forced Keenan into the human world against his will. It was there that Keenan learned from DATS's commander, Commander Sampson, of his birth parents, the Crier couple. Keenan, the son of Kevin Crier, was sucked into the Digital Gate by accident when he was a baby. Though Kevin and his wife participated in a Digital World expedition team in order to rescue Keenan, they never found him. Keenan, with urging from Marcus, decides to meet them, but Gotsumon makes that difficult with three Okuwamon; two were defeated by RiseGreymon and Lilamon. A Hagurumon then appears and takes over Mr. Crier's home by using his Darkness Gear on a toy robot (left over from Keenan's childhood) which merges with the house and then uses the memories that Keenan had of the toy robot and transforms it into a bizarre, giant, toy-robot house with Michelle Crier trapped inside. Hagurumon's face was seen as the left eye of the robot. Michelle was rescues by Keenan and Falcomon. Hagurumon was destroyed by RiseGreymon. Thus the toy robot his gear merged with returned to normal.

Even though he was briefly reunited with his mother, Keenan's memories of Frigimon (who Keenan regards as his mother) were still etched in his mind. Though he realized that he loved his human mother as well, his human father warned that his presence may upset his mother, who had to undergo a lengthy and hard recovery from his initial disappearance. In addition, the Criers now had a second child, Keenan's baby sister, Ruka. Suddenly, Sampson's superior, Chief Hashiba, whose department oversees DATS, appears and tries to declare the Crier family as criminals for secretly researching Digimon and opening a Digital Gate. In order to save his human family from imprisonment and keep his infant sister united with his parents, Keenan ultimately denounces his humanity and takes the blame as he runs off with Falcomon, saving his family from prosecution. Marcus and the other DATS members become extremely angered at Chief Hashiba for his actions.

Matters get worse when Gotsumon appears later leading SaberLeomon's army of Boarmon and Pteramon in an onslaught against the city unless Keenan is brought before him. Gotsumon now sees Keenan as a traitor to the Digimon and wishes to destroy him and Falcomon for what he sees as collaboration with the humans. The DATS members flatly refuse and wage an all out war against the invading forces. Keenan, filled with grief and worry for his new friends, eventually pops up to help them. After that, Marcus moves Keenan in with his family, and acts as surrogate big-brother towards him. Marcus's family and the other DATS members also try to help get Keenan settled, all the while hiding his presence from Chief Hashiba.

When Marcus and company set for the Digital World to meet Merukimon and propose peace between Earth and the Digital World, Keenan remained at home. But after much thought and soul-searching, he decided to follow them and them obtain the peace they, and now him as well, wished for. However, the mission goes wrong when Kurata, under false pretenses of peace, attacks Merukimon using Gizmon XT, which is under his control. It is then that Kurata reveals the truth about Frigimon's death and that he is the real culprit. Merukimon is mortally wounded by one of Kurata's Gizmon XT. Keenan is moved by Merukimon's last words, realizing that the only humans he must fight are the evil ones, and also realizing that Frigimon wanted him to live in peace with both his human and Digimon natures. His digisoul awakened further allowing him to bring Falcomon to his Ultimate level, Crowmon. With this new power, Keenan managed to save the DATS team who were now engaged in battle with Kurata on Keenan's behalf and were about to be defeated.

Unfortunately, Kurata escapes through a Digital Portal and upon returning to Earth, convinces Chief Hashiba that DATS is now a traitorous and rogue organization. When Keenan and the others return to Earth, they are met by an armed defense force, which separates them from their Digimon Partners. Falcomon and the other Digimon eventually escape and rescue Keenan and the others. During this time as a fugitive, Keenan once again reunites with his biological family after helping to rescue them from confinement by DATS. Keenan's parents then help reopen a DigiPortal to the Digital World so Keenan and the others can help rescue the DigiWorld from Kurata's attacks. Before he goes through the portal, Keenan and his family make amends and promise that upon his return, they'll become a real family once again, and Keenan promises that he will return and protect both his Digimon and human families from harm.

When Kurata ordered an attack on the Digital World's capital city, ElDoradimon, Keenan sought the help of his friends, the Ninjamon tribe, to help defend the city. Unfortunately, Kurata was able to succeed in transporting ElDoradimon and the DATS members to the human world, where he used Gizmon Javelin to kill him. Later on in the story, during the fight with Kurata fused with Belphemon, Keenan summons his full DigiSoul and Falcomon evolved to Ravemon. Though they were able to defeat Kurata, his actions caused a large rift to open between the human and Digital Worlds, and the group decided to seek out Yggdrasill/King Drasil, God of the Digital World to help fix it. However, King Drasil had ordered the destruction of Earth, seeing it as the only way to save the Digital World.

Keenan accompanied the DATS crew when they went to the Digital World to confront Yggdrasill. After they were saved from Yggdrasill's Royal Knights by Sleipmon, and Marcus returned to the Digital World, Keenan stayed behind with the others until he fought Leopardmon alongside Yoshi. During the fight, his Digivice iC became a Digivice Burst and he was able to to change Ravemon into Ravemon Burst Mode. After the defeat of Leopardmon, Keenan joined Thomas and Yoshi on the quest to find Marcus back in the Digital World.

After Yggdrasill/King Drasil was defeated, Keenan spent a final evening with Falcomon, where both cried their hearts out. The next day, he watched Falcomon return to the Digital World with the other Digimon, and witnessed Marcus's departure as well. 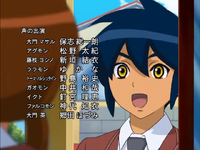 Five years later, Keenan goes to middle school with Kristy Damon, and has both removed his face paint and learned to speak naturally. The pair of them meet with Yoshi and Yushima along the way to school one day.

At some point, the Old Clock Shop Man summoned the heroes of the past to the Fusion universe to help take down Quartzmon. Keenan shows up with Ravemon, Yolei Inoue and Aquilamon to assist in the DigiQuartz. A Great Legendary Hero Gathering! The Digimon All-star Showdown!!

Retrieved from "https://digimon.fandom.com/wiki/Keenan_Crier?oldid=508798"
Community content is available under CC-BY-SA unless otherwise noted.