In Digimon Adventure: Our War Game!, Japan is the home of a group of children who witness the battle against Diaboromon.[1]

Chiba (千葉市, Chiba-shi?) is the capital city of Chiba Prefecture.

In Digimon Adventure 02: Digimon Hurricane Landing!!/Transcendent Evolution!! The Golden Digimentals, Davis Motomiya, DemiVeemon, Yolei Inoue, Upamon, Cody Hida, and Poromon are at a beach in Chiba[2] when they receive an e-mail from Kari Kamiya asking for help.

Digimon Cram School (デジモン塾, Dejimon Juku?) is a cram school in the manga published in the Bandai's Official "Digital Series" - Digimon Pendulum 2: Deep Savers. It is located in an unspecified city. Souichirou Dejimon is its principal.

The Digimon Institute (デジモン研究所, Dejimon Kenkyūjo?) is an institute in the manga published in the Bandai's Official "Digital Series" - Digimon Pendulum: Nature Spirits. It us located in an unspecified city. Pen Dulum is a professor in the institute.

Gunma Prefecture (群馬県, Gunma-ken?) is a prefecture of Japan.

In Digimon Story: Cyber Sleuth, when Ryota Takei asks Sakura Fujisaki which country Aiba has supposedly been to, she guesses Gunma, until Ryota reminds her Gunma is in Japan.

The Hifumigaoka Peripheral Region (ヒフミヶ丘周辺地域, Hifumigaoka Shūhen Chiiki?) is the main setting of Digimon Universe: Appli Monsters (3DS). It is a region that encompasses the four towns of Hifumigaoka, Yongendōri, Nikotamagawa, and Mihamakou, from west to east. The towns' names are derived from the numbers "one", "two", "three", and "four" after the order in which they appear in the game.

Hifumigaoka (ヒフミヶ丘, Hifumigaoka?) is a town in Digimon Universe: Appli Monsters (3DS). It is located at west of Yongendōri, and is the hometown of the Protagonist, Naoto, and Mio.

Hifumigaoka Middle School (ヒフミヶ丘中学校, Hifumigaoka Chūgakkou?) is a school in Digimon Universe: Appli Monsters (3DS). It is a three-store building, and has a terrace and an infirmary. It is the school the Protagonist, Naoto, Mio, and Yukari attend. Yukari attends cass 3-2 and spends a lot of time at the infirmary, which led to her bing known as the "Angel of the Infirmary".

The school's gym's AR-Field cointains the Cyber Arena, and as such, App Drivers go to it even in weekends. A Batterimon is at the infirmary's AR-Field.

Mihamakou (ミハマ港, Mihamakou?) is a town in Digimon Universe: Appli Monsters (3DS). It is a coastal town located at east of Nikotamagawa, and is where Ryouji and the Mihama Gang live. The city has a research center.

Nikotamagawa (ニコタマ川, Nikotamagawa?) is a town in Digimon Universe: Appli Monsters (3DS). It is located near a river, and is at east of Yongendōri and west of Mihamakou.

Yongendōri (ヨンゲン通り, Yongendōri?) is a town in Digimon Universe: Appli Monsters (3DS). It is located at east of Hifumigaoka and west of Nikotamagawa, and is the hometown of Kayo and Kagefumi. There is a mountain behind Kayo's house.

The Protagonist and Logimon chase Kayo to Yongendōri for their C Ranker Battle, after Ouji tells them where she lives. The two of them return to Yongendōri when Kayo informs them Kagefumi lives there. 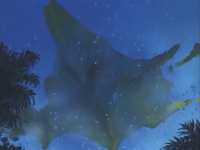 Hokkaido (北海道, Hokkaidō?) is a prefecture of Japan.

In Digimon Adventure, when the DigiDestined return to the Digital World, they see Hokkaido in the sky. Enter The Dark Masters 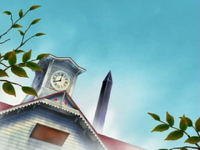 In Digimon Adventure 02, when Control Spires appear around the Real World, a Control Spire and a Knightmon show up in Sapporo, near the clock tower area. Dramon Power

In Digimon Fusion, after Betsumon is captured, the Old Clock Shop Man makes a joke about Betsumon coming from Monbetsu. Resemblance? No Resemblance? The Masquerade-Thief Betsumon

Ichiban Town (一番町, Ichiban-chou?, lit. "First Town") is a town in Digimon Next. It is the hometown of Tsurugi Tatsuno, Yu Inui, Ami Kitajima, Sho Kahara, and Tooru. 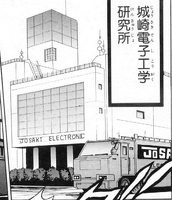 Shin'ichirou has Kentarou Kamon and Bun go there to fight him and his Deathmon, with Makoto Abe and two of his and Kentarou's classmates as spectators.

In Digimon Universe App Monsters, after Messemon is cured of the L-Virus, he says he feels refreshed "like summer in Karuizawa". Search Result: Shinkai Haru! Gatchmon Appears!

Kusanagi City (くさなぎシティ, Kusanagi Shiti?) is the hometown of Junior, Ivy, and Teddy in Digimon World 3.

The MAGAMI Online Center (マガミオンライン・センター, Magami Onrain Sentā?) is where people set up their Digimon Online accounts in Digimon World 3.

Junior, Ivy, and Teddy go there to set up their accounts.

The Chamber Room (チェンバー・ルーム, Chenbā Rūmu?) is where players have access to the Digital World.

Junior arrives at the Chamber Room and says his Account Name to the Operator. After that, he enters the Chamber Capsule, which closes when Ivy and Teddy arrive.

The Street Corner (まちかど, Machikado?) is a street corner located in Kusanagi City.

Junior waits for Ivy and Teddy who are late to play Digimon Online. After they finally arrive, the three head to the MAGAMI Online Center.

In Digimon Adventure, Kyoto is said to be protected by the four gods, A Chance Encounter and that its center is protected by the Heso-ishi. The balance of all four directions in Kyoto is connected to the Harmonious Ones. Digimon Mystery File: Release The 1000 Year Seal!

Kyoto is also Toshiko's home, and is where she met Haruhiko Takenouchi, who was doing anthropological research in the city. After they got married and settled in Tokyo, Haruhiko was transferred to an university in Kyoto. Digimon Adventure Original Story: 2½ Year Break It is also the location of Izzy's parents' graves. Digimon Mystery File: Release The 1000 Year Seal!

Jim Kido (Shuu) is a student at the university Haruhiko works. A Chance Encounter

In 2001, Matt, Sora, Izzy, Mimi, and Joe all visit the city in the same day for different reasons. In this day, the balance of the four di

In 2002, when introducing herself to T.K. in the Japanese version, Miyako explains that her name uses the same character as the "Kyo" (京, Kyō?) in Kyoto. In the Brazilian dub, she states "Yolei" is spelled with "Y", like Kyoto. Enter Flamedramon

One day, Yolei and her class arrive at Kyoto for a school trip. While she is there, she is forced to deal with an Apemon and a Musyamon who found their way out of the Digital World due to distortions caused by BlackWarGreymon. She also meets Haruhiko and Jim while they do their research. A Chance Encounter

In Digimon Adventure, in 2001, when visiting Kyoto to learn more about Japanese culture, Mimi is at Kawaramachi Street, where she meets Matt, Izzy, and Joe. Digimon Mystery File: Release The 1000 Year Seal!

In Digimon Adventure, Rokkaku-dō (六角堂, Rokkaku-dō?) is the temple where the Heso-ishi is. In 2001, the DigiDestined go to the temple when investigating the source of the strange incidents happening in Kyoto. Digimon Mystery File: Release The 1000 Year Seal! 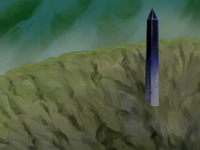 In Digimon Adventure 02, when Control Spires appear around the Real World, a Control Spire and a Drimogemon show up in Mount Aso (阿蘇山, Aso-san?). Dramon Power

Thank You Future! Welcome to the City of AI!

oDanold[4] is a fast food restaurant located in an unspecified city in Digimon World Re:Digitize. Its name is a reference to McDonald's. 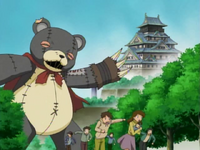 In Digimon Adventure: Our War Game!, Shimane (島根町, Shimane-chō?) is the town Kinu lives in.

On March 4[5], 2000, Yamato "Matt" Ishida and Takeru "T.K." Takaishi are on vacation at their grandmother's house when Taichi "Tai" Kamiya calls them to help in the battle against Diaboromon. The two siblings then start searching for a computer in the nearby houses. 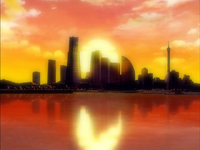 In Digimon Tamers, when Rika returns to the Real World, the Nonaka's stay at a hotel in Yokohama (横浜市, Yokohama-shi?) for Rumiko's photoshoot. Reunion

Yokohama is the main Human World setting for Digimon Data Squad, and the hometown of Marcus Daimon.

Yokohama Village is a location in Digimon Masters.

Otori Middle School (私立鳳学園, Shiritsu Ōtori Gakuen?, lit. "Private Ōtori Academy") is a middle school in Digimon Data Squad. Its name is a pun on the Yokohama Municipal Otori Junior High School (横浜市立大鳥中学校, Yokohama Shiritsu Ōtori Chūgakkou?) after which the school is based.

Shiratori Retreat (しらとり庵, Shiratori-iori?) is a restaurant in Digimon Data Squad. It is owned by Tasuke Shitori.