View source
watch 02:24
Wiki Targeted (Entertainment)
Do you like this video?
Play Sound

Infected Digimon (感染デジモン, Kansen Dejimon?) is the overarching mystery of Digimon Adventure tri. Not much is known about the phenomenon, except it causes the Digimon in question to act out in a berserk manner and makes them more powerful than usual. It also appears in Digimon World: Next Order.

Infected Digimon are a phenomenon that causes Digimon to go berserk. The cause is not revealed at first, but humans from the National Data Processing Bureau and Digimon in the Digital World are both attempting to solve the crisis and mitigate the damage. Reunion Determination It is later discovered that Meicoomon was the source of the infection. Confession

Jijimon tells the Hero that something strange, likely a Digimon from another World, had been picked up in Mod Cape. They are sent to investigate, assuming that it is Meicoomon, as the tamer had already befriended her in the past. Upon arrival to Mod Cape, the BlackAgumon that usually roam on the ship are all knocked out. The tamer is able to wake them up, though they have no memory as to why they had been knocked out, or even as to why they are on the ship, showing thy all have amnesia. Once an antivirus is used on them they remember that they saw a strange looking Digimon, covered in a black aura and that upon seeing her, they all "started to feel fuzzy" and then blacked out. After helping the BlackAgumons, the tamer is sent a message that the signal had now been picked at in the Infinite Cauldron. Once there, the tamer finds a ShadowWereGarurumon, who had been defeated in less than 10 seconds. Once the tamer offers to help heal him though, he suddenly is cloaked in a purple aura and attacks the tamer's partners. After defeating the WereGarurumon, the tamer uses an anti virus on him which causes him to regain control of himself, then explains that a strange looking orange fuzzy Digimon covered in a black aura appeared, which caused him to feel fuzzy and he attacked it in self defence, only to be quickly defeated.

The Hero is sent to Server Desert next where Meicrackmon Vicious Mode is found, currently in the process of fighting and infecting Yukimura and Rikka. When Yukimura attacks Meicrackmon, Meicrackmon yells out that she will not forgive White Fang and teleports away. Luckily though, Yukimura had managed to gain a small amount of the black aura. When Luche touches it, the aura is destroyed, showing that Luche is immune to it and is able to neutralise it. They come up with a plan for Shoma Tsuzuki and Noir distract it, whilst Luche applies an anti virus made out of her DNA and whilst the aura is being neutralised, the Hero's partners swoop in to defeat her. The group finds Meicrackmon in the same place that Meicoomon had originally been found. The plan works and after being defeated, Meicrackmon regains control and realises she is back in the Next Order Universe, as it was not her first time there. The "White Fang" intended to use Meicoomon for evil, so captured her and Meiko Mochizuki, her partner, fell into a trap on purpose allowing her to escape. When Meicoomon tried to free her, the White Fang used a machine that caused her to digivolve and then cross dimensions, with the shock of dimension hopping causing her to suffer from amnesia, causing her to lose control and attack everyone she came across. Luche's DNA causes Meicoomon to be cured of the Infection. Meicoomon then returns to the Adventure Universe, using the power of her bond with Meiko and then frees her from the White Fang.

Kuwagamon is one of the first Digimon to be shown to be infected. It often appears in the Human World and disrupts electronics. One eventually appears at Taichi "Tai" Kamiya's soccer match, causing Tai to give chase. It eventually attacks him, causing a widespread swathe of destruction. Agumon saves Tai, and then Greymon proceeds to get into a battle that takes them to Haneda Airport, where they cause further destruction as Kuwagamon gets the upper-hand. The other DigiDestined appear on scene, but two more Kuwagamon emerge. Birdramon, Kabuterimon, Angemon, and Gatomon take care of the other two, but the first manages to defeat Garurumon. Before it can land the killing blow, Alphamon's hand appears from a portal and drags the Kuwagamon back into it. Reunion

Ogremon attacks Primary Village and destroys the Digi-Eggs as Elecmon watches on in horror. He is chased by Leomon and attempts to escape to the Real World, where the National Data Processing Bureau meets him. Ogremon is too strong, however, and breaks past their defensive line, but he is pulled back by Leomon. Later, Ogremon once again resurfaces in the Real World, and is met by Meicoomon and Togemon. Once again, Leomon appears and drags Ogremon back to the Digital World. Determination

Leomon ends up dealing with an infection when the Digimon Emperor kidnaps Meicoomon. It paralyzes him during the fight with Imperialdramon Dragon Mode. The residual traces of the infection appear to linger and seems to be the impetus that causes Meicoomon to kill him. Determination

An infected Imperialdramon Dragon Mode is under the control of the Digimon Emperor when he kidnaps Meicoomon. He attacks Palmon and Gomamon, only to be defeated by their newly-attained Mega forms, Rosemon and Vikemon whilst in its Fighter Mode. Determination

Maki Himekawa reveals that she believes Meicoomon to be the source of the infection. Determination

He is the first of the Digidestined's Digimon to become infected. He briefly acts violent and bites T.K.'s arm. He digivolves to Angemon but Angemon succumbed to the infection while facing Meicrackmon and instead targeted his fellow Digimon. Confession

During the fight with Meicrackmon, Birdramon became infected and turned on her fellow Digimon. Confession

During the fight with Meicrackmon, Togemon became infected and turned on her fellow Digimon. Confession

During the fight with Meicrackmon, Ikkakumon became infected and turned on his fellow Digimon. Confession

During the fight with Meicrackmon, Garurumon became infected and turned on his fellow Digimon. Confession

During the fight with Meicrackmon, Angewomon became infected and turned on her fellow Digimon. Confession 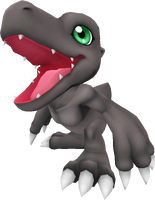 Three Agumon (Black) are infected by Meicrackmon, but are cured by Mameo's anti-virus. 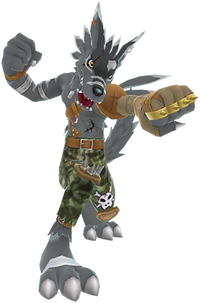 A WereGarurumon (Black) is infected by Meicrackmon, but is cured by Mameo's anti-virus. 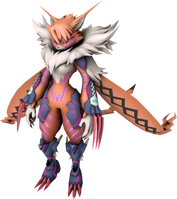