Commander-General Homer Yushima (湯島 浩, Yushima Hiroshi?) is a fictional character in the anime series Digimon Data Squad. He is voiced by Yuuichi Nagashima for the Japanese version, and is voiced by Kirk Thornton for the English dub.

When people began disappearing, Chief Homer Yushima and Richard Sampson began investigating. They soon learned that the disappearances were the result of a Digital World interference. Along with Dr. Spencer Damon, his assistant Akihiro Kurata, and the Criers, who lost their son Keenan during a Digi-gate experiment. Unfortunately, their trip to the digital world was hazardous and they only found Keenan's basket and toy robot. Worse, Kurata panicked and fired at a Digimon, despite Spencer's warnings not to, which would only cause hostility. They retreated into a cave, which was inhabited by SaberLeomon, who detested the intruders based on Kurata's actions. In desperation, Kurata used an experimental space oscillation device to create a portal home but Spencer stayed behind to cover their retreat, activating his DNA charge.

Spencer managed to contact home, having made friends with Merukimon and looks for King Drasil, the ruler of the Digital World. He told Yushima and Sampson to create the Digimon Data Squad, or DATS for short, to send Digimon who appeared in the Real World back as Digi-eggs, as well as plans for a digivice to help partner Digimon digivolve. Yushima received Kamemon as his partner, who regularly serves tea for the other DATS members.

When the series began, he appeared to Marcus, giving him his Digivice. The old man would appear again, mostly at opportune times, to give Marcus advice pertaining to his latest challenge. The facts about him were later revealed when he journeyed to the Digital World in order to aid Marcus and the others in their second encounter with Merukimon. Yushima was eventually forced to help them escape back to the Human World, and disappeared in a cave-in inside Merukimon's lair. Gwappamon managed to save him and they barely clinged to life as they escaped from the Infinite Ice Ridge. They heard that Spencer had managed to seek out King Drasil and they decided to retrace his tracks. He later reappeared, captured by the Digimon riding on ElDradimon, until it was revealed that the Digimon saw Marcus's (who was also present) father as their savior, and they were set free. Later, Yushima helped in the fight against the Gizumon XT, attempting to prevent their attack on ElDradimon, but it was in vain, as ElDradimon was transported back to the Human World via a Digital Gate and later destroyed.

Yushima and Kamemon then infiltrated a hospital where Thomas' sister Relena was awaiting "surgery" to cure her condition. They tried to sneak her out and learned that Kurata intended to make Relena a Bio Hybrid. He is then captured and Kamemon is taken away from him. He figured that Thomas was actually deceiving Kurata, which actually turned out to be true, as Kurata secretly had a backup plan. 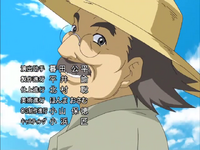 Five years later, Homer still watches over the others, and still loves to fish.

Yushima is an NPC who sells the Tamer Digivices.

Retrieved from "https://digimon.fandom.com/wiki/Homer_Yushima?oldid=513259"
Community content is available under CC-BY-SA unless otherwise noted.