Hackmon is a Digimon character.

Hackmon is a Digimon that Taichi "Tai" Kamiya and Agumon meet in the Digital Dungeon. 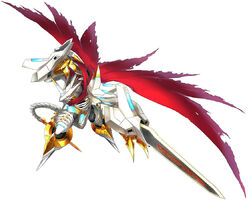 Jesmon is the youngest, newest recruit in the Royal Knight ranks and a deeply loyal ally of Omnimon. As Hackmon, he was tasked by his mentor, Gankoomon, to defeat BanchoLeomon in combat. There was a catch, however: Hackmon needed Aiba to help them. Feeling betrayed, he ran off to battle BanchoLeomon himself, only to fail. It wasn't until Aiba arrived that Hackmon achieved his goal. During the aftermath of the battle, Hackmon Warp-Digivolves into Jesmon, becoming a full-fledged Royal Knight and eternally indebted to Aiba. As thanks, and on Gankoomon's request, he sides with Omnimon against Leopardmon's forces.