DigimonWiki
Register
Don't have an account?
Sign In
Advertisement
in: All articles with unsourced statements, Articles with section stubs, Partner Digimon,
and 6 more
English

View source
watch 03:36
Wiki Targeted (Entertainment)
Do you like this video?
Play Sound

Guilmon is a fictional character from the Digimon franchise. Guilmon is featured in Digimon Tamers and related media and is Takato Matsuki's Partner.

Guilmon's chest is emblazoned with the Digital Hazard symbol; the symbol did not appear on the original sketch of Guilmon that Takato used to create him, but did show up on other pages.[citation needed]

Guilmon is a virus-type Digimon, though his attitude and kindness most of the time could lead to thinking that he was a data or even a vaccine-type. Guilmon's fighting style, in which he gives in to his bestial nature, exhibits his viral nature, as he fights with much more zeal and ferocity than Agumon or other Digimon protagonists, as his partner, Takato Matsuki, intended on when he came up with Guilmon.

Though he doesn't look it, Guilmon is normally playful and friendly, proving to be quite popular with Takato's classmates for being a real live Digimon Snakes, Trains, and Digimon. Despite being portrayed as childlike, Guilmon occasionally shows deep insight. For example, when Takato didn't want Guilmon to digivolve, in fear that Guilmon would no longer be the same, Guilmon pointed out that Takato has changed over time as well, but he is still the same person.

Guilmon gets along very well with Terriermon and Calumon, but his first meeting with Renamon was as enemies. Guilmon later acknowledges Renamon's knack for "being right" in combat situations Reunion. Guilmon would either ignore Impmon or try to play with him.

At first, Guilmon wasn't very good at listening to Takato, always breaking out of his cage, and fighting Renamon when Takato told him not to. Guilmon admired Takato's determination after he worked frantically to reverse Guilmon's first digivolution, and has since obeyed Takato's every word. Not as Seen on TV

In the Japanese version, Guilmon has a habit of speaking in third person. This includes referring to others by their name rather than "you" and referring to himself in third-person tone. He mostly seems to alternate between this and the use of pronouns throughout the series, although he typically only does this as Guilmon and Growlmon. He also stops his "Takatomon" habit much earlier in this version, though he continues doing it a little bit throughout the rest of the English version.

Guilmon is a curious and naive Digimon, the youngest of the partner Digimon, and also has a strong love for bread. He is extremely powerful for a Rookie, and is able to injure or defeat Champion and Ultimate Digimon that higher-level Digimon have trouble with. Guilmon is literally thick-skinned and thickheaded, giving him substantial protection from enemy attacks, and making his headbutts deadly.

Guilmon was created from Takato's drawings of Guilmon, and brought to life by the mysterious Blue Card. Guilmon Comes Alive At first, Guilmon had not been aware of the differences between humans and Digimon, calling his partner Tamer "Takatomon".

Guilmon and Takato Matsuki show up in the Digital Dungeon.

A Gallantmon runs an armory at the Autumn Leaf Fair, and is unable to help Zoe Orimoto find the Toucanmon and the stolen D-Tectors. 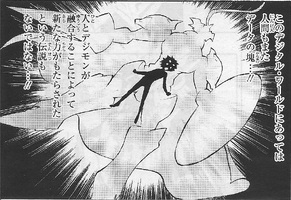 When AxeKnightmon ponders Nene's digifuse with Shademon, he recalls a legend about a human digifusing with his Digimon, and pictures Takato and his Digimon becoming Gallantmon. Xros Revolution!! The Guide to Miracles!!

The name "Guilmon" refers to only the Rookie form of this digimon. Throughout the series, Guilmon gains the ability to digivolve into a number of more powerful forms (each with a different name). The rookie form, however, is his most common and preferred form.