DigimonWiki
Register
Don't have an account?
Sign In
Advertisement
in: Articles with section stubs, Partner Digimon, Characters in Digimon Adventure:,
and 2 more

View source
watch 01:33
House of the Dragon Trailer - The Loop
Do you like this video?
Play Sound

Gatomon is Kari Kamiya's Partner in Digimon Adventure:. At some point she was captured by the Dark Digimon and corrupted into SkullKnightmon, but is later defeated by WarGreymon and reverts back to Gatomon.

As Ophanimon, she played an important role in the ancient battle against ZeedMillenniummon. After most of the other Digimon in the Army of Light were destroyed, Seraphimon and Ophanimon DNA Digivolved WarGreymon and MetalGarurumon into Omnimon who, empowered by the souls of all of the fallen Digimon, destroyed ZeedMillenniummon. The Crest of Courage

Despite the corruption by Millenniummon's followers, Gatomon's soul still existed inside of SkullKnightmon. The Hikari of Dawn The Glowing Angewomon Her feathers later appeared to Kari Kamiya to help cause the DNA Digivolution of Omnimon once more. War Game Countdown to Tokyo's Annihilation

After being taken inside of SkullKnightmon, Kari found and awakened Gatomon's soul. Tai Kamiya and WarGreymon broke into AxeKnightmon to save Kari, freeing both Kari and Gatomon. AxeKnightmon then reverted into her true form of Gatomon who became Kari's partner. The Hikari of Dawn Hikari and Tailmon 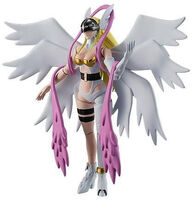