On October 31, Gatchmon wears a pumpkin outfit. I'll Get You and Your Disguise Too! Caméramon's Halloween Scandal!

Gatchmon is investigating Leviathan's actions when he is discovered and has to flee. Desperate to escape, he performs a search and finds Haru Shinkai, emerging from his smartphone. After explaining the concept of Appmon, Gatchmon declares Haru to be his Buddy, though Haru refuses. He begins to fade, however, having exhausted his personal power in the Real World. Haru's attention is then drawn by his mother, whose messaging app is on the fritz. Gatchmon reveals that a virus-infected Messemon is the cause. Messemon proceeds to reveal embarrassing images to world before fleeing into an AR-Field; Gatchmon and Haru give chase. Messemon attacks the pair, and Gatchmon calls on Haru to apprealize him, but Haru is too scared. Despite being in his weak chip form, Gatchmon defends Haru, telling him that he has confidence in him. Haru eventually decides that he does want to be a main character, unlocks his App Driver, and apprealizes him.

Now at full strength, Gatchmon attempts to scan Messemon for a weakness, but the relentless attacks prevent him. Haru aids him with a keyword, allowing Gatchmon to perform a search and realize Messemon's weakness: that words can only do damage if you let them. Gatchmon uses this idea to simply ignore Messemon's attacks, allowing him to get close enough to attack and purge Messemon of the virus. The partnership cemented, the pair exit the AR-Field. Search Result: Shinkai Haru! Gatchmon Appears!

The following week, Gatchmon joins Haru in searching for Ai Kashiki after navigation apps go on the fritz. During the search, Gatchmon tells Haru about his investigation into Leviathan and the L-Virus that causes Appmon to go out of control while also discovering that saying Leviathan's name causes him to freeze up. They come across a virus-infected Navimon, the cause of the problem, and chase him into an AR-Field. Navimon proves to be difficult and tricky, using his arrows as a basis for homing attacks. Haru's search allows Gatchmon to realize that rotation confounds the Navimon's location capabilities, and then Gatchmon teaches Haru how to perform an Applink. Haru applinks Messemon with Gatchmon, which allows him to use Messemon's trailing body to stymie Navimon. Gatchmon then defeats and purifies Navimon. They are attacked by Cameramon not long after, and Cameramon manages to blind Gatchmon. Haru gets the idea to applink Gatchmon with Navimon but accidentally perform an App Fusion, creating DoGatchmon. The Suspicious Travel Guide! Navimon I Am! DoGatchmon forces Cameramon to flee with one attack.

Afterward at school, Gatchmon tells Haru more about DoGatchmon, teaching him that, while most Appmon can applink with each other, certain pairs of Appmon instead perform a fusion, combining and increasing in grade. He also mentions that it will take a while for DoGatchmon to be able to be apprealized, and he gets into an argument with Navimon over who contributed mroe to DoGatchmon. Yujin calls for Haru afterward, and Gatchmon and Navimon hide while they leave. Gatchmon is present at Kashinoki Books when Ropuremon begins wrecking havoc on Fantasy Saga players at first and then the whole city later. He and Haru give chase, ending up back at school. An AR-Field exists, which has turned the school into a recreation of the Awesome Excitement Dungeon video game. Gatchmon is frustrated with the subsequent dungeon crawl as he is the subject of its unfairness, though Haru greatly enjoys. At the end, they find a despondent Ropuremon who is angry that they used a walkthrough to make it to the end. Gatchmon tells him that it's impossible to clear the game without one, reading out forum states that call the game boring. This pushes Ropuremon's berserk button, and he grows into a huge size befitting a final boss. Haru attempts to appfuse DoGatchmon once more, but the fusion fails, forming the ineffectual Sukasimon instead; Haru attributes this to Gatchmon's and Navimon's discord. Sukasimon is easily defeated and unfuses, taking with him Gatchmon's energy. Right before Ropuremon can strike down Gatchmon, Haru tells Ropuremon that he honestly enjoyed his adventure. Seeing Haru's sincerity allows Ropuremon to purify himself of the L-Virus, and he surrenders his Appmon Chip while revealing himself to be a 7code Appmon. Haru obtains the Seven Code Pad in the process. Gatchmon believes that gathering all the 7code Appmon will unlock a power that will allow them to face Leviathan, so they make it their goal to obtain all seven. The Character I Leveled Up is Naked?! Ropuremon's School Dungeon!

On Halloween, Gatchmon wants to partake in the holiday's bounty, namely sweets. Haru is absorbed in a book about artificial intelligence and refuses to leave despite Gatchmon's nagging. Eventually, Haru snaps that Gatchmon can head out alone, and so Gatchmon does so. Dressing up as a pumpkin, he goes trick-or-treating. A pair of girls finds him creepy-cute and happily give him sweets, which he greatly enjoys. Gatchmon eventually comes across Haru being harassed by Cameramon's Men in Black and rescues Haru's App Drive before he can be stolen. Haru flees with Gatchmon in hand and apologizes for his earlier behavior. Gatchmon waves it off, as their bond as Buddies is too strong for something small like that. They take the fight to Cameramon in an AR-Field, but Gatchmon admits surprise when Cameramon proves to be able to appfuse into Scorpmon, as he believed Haru's App Drive was unique. Scorpmon's strength requires DoGatchmon, and though Haru is initially hesitant due to Sukasimon's previous appearance, they manage to bring DoGatchmon forth. Scorpmon's power is strong and accurate, and he is able to snipe them unerringly no matter where they hid. Realiizing that Scorpmon is using the surveillance system to track then, Haru searches for the cameras' blindspots, which allows DoGatchmon to plot a path and sneak up on Scorpmon. DoGatchmon defeats Scorpmon in melee range, though Scorpmon's Appmon Chip is rescued by Mienumon. Gatchmon and Haru completely make up in the aftermath over sweets. I'll Get You and Your Disguise Too! Caméramon's Halloween Scandal!

On November 3, Gatchmon saves Haru's App Drive from a juice spill and berates Haru when the television catches Haru's attention. On it, Haru sees a blue App Drive in the possession of an Appliyama 470 idol named Eri Karan. Deciding to follow up on the existence of more App Drives and possibly recruit more fighters against Leviathan, he and Haru sneak into the television station where Eri is being interviewed alongside other members of the idol group. They end up in her dressing room and introduce themselves, with Eri being excited to meet someone else with an App Drive. Eri reveals her own Buddy Appmon, Dokamon, who remains as an Appmon Chip in contrast to the apprealized Gatchmon. Before their discussion can continue, fashion apps go on the fritz, with a viral Dressmon as the culprit. Gatchmon and Haru chase Dressmon into an AR-Field, dragging Eri and Dokamon along despite the former's reluctance. Within the AR-Field, Dressmon's attacks prove strong enough to stall Gatchmon, and they are forced to retreat. As they try to plan an attack, Dressmon shreds their cover and traps Gatchmon. Dokamon and Eri reach an understanding that allows Eri to apprealize Dokamon. They drive off Dressmon long enough for Haru to free Gatchmon. Eri then lends Haru Dokamon's chip to allow him to applink Gatchmon with Dokamon. The pair are able to defeat and purify Dressmon, returning the fashion apps to normal. That evening, Eri recounts the events that led to her obtaining an App Drive, and the two pairs part ways after exchanging contact information. A Big Bang Punch Straight to Your Heart! Eri's an Appmon Idol! A couple days later, Gatchmon and Haru watch Eri fail at a dining review and then help her research at Kashinoki Books afterward. When widespread data loss occurs in the city, they eventually end up in the AR-Field of the culprit, Gomimon. He and Haru are more or less incidental in the resulting battle, though Gomimon turns out to be a 7code Appmon, and Eri willingly hands over his chip. The Ultimate Restaurant Report! Dining App Perorimon!

On October 29, Dokamon lends Gatchmon his powers so that they can defeat Dressmon. A Big Bang Punch Straight to Your Heart! Eri's an Appmon Idol!

In the manga, he defeats Weathermon. Determination Install!! 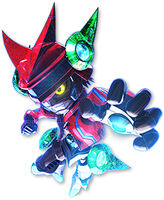 On October 8, Haru, nervous by Cameramon's attack, tries to applink Gatchmon and Navimon but the result ends up being an App Fusion. The Suspicious Travel Guide! Navimon I Am! DoGatchmon easily defeats Cameramon. The Character I Leveled Up is Naked?! Ropuremon's School Dungeon! Later on, he manages to defeat Scorpmon by abusing the blindspots in his surveillance to sneak up on him, and he then proves his superiority in melee range. I'll Get You and Your Disguise Too! Caméramon's Halloween Scandal!

In the 3DS game, this fusion can be achieved with Tsubumon as a substitute for either Gatchmon or Navimon.

On December 17, Rei finally decided to allow Haru Shinkai to Applink DoGatchmon and Raidramon in order to defeat Sakusimon. This form was also used to try and hijack Sakusimon's information on Hajime Katsura. Sakusimon—Defeat With Super Applink! 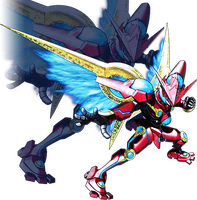 On February 11, after seeing how powerful Haru and DoGatchmon's bond was, Timemon shows up in time to help the two eradicate an attacking army of Virusmon that had already infected Musimon. He then gives his chip to Haru, enabling him and DoGatchmon to combine into Globemon, who is able to search for and wipe out all existing Virusmon roaming around Earth. The Net Ocean is in a Big Pinch! The "Time" has Come, Ultimate App Fusion!

Other Applinks and App Fusions