Gaomon is a young blue akita-like dog Digimon who wears a red bandana tied around his head and a pair of large red boxing gloves.

Gaomon first appears when Tsurugi Tatsuno and Agumon go to a town ruined by the Commandments. He steals their Data Link Digivice in order to feed his partner, Yuu Inui, only to be tracked by Agumon, with whom he forms an instant rivalry. Their bickering is interrupted by an attacking Tankdramon, and he helps distract him while GeoGreymon attacks his weakpoint. He and Yuu then join Tsurugi and Agumon on their journey.

Soon after, the group comes to i-Land, where Digi-Eggs are kept until they hatch. After Tsurugi and Yuu are captured by Waspmon, Agumon and Gaomon are trapped outside, faced with Waspmon and a horde of Fanbeemon. Gaomon tells Agumon to find Tsuguri and get him to use his Digisoul to get him to digivolve after Waspmon digivolves to CannonBeemon. While distracting Cannonbeemon, Gaomon is badly injured and nearly dies, but is saved by the wound treating function of Tsuguri's Digivice.

He later helps Yuu sneak away into the desert in order to run away, taking care of Yuu by providing him with food and water. When they came to an oasis, they had fun with the Sun Caravan which came, but when Meramon attacked Gaomon could do little to help until he digivolved to Gaogamon.

Over the course of the journey, Gaomon grows to be jealous of Trailmon's bond with Yuu but learns to accept it.

Gaomon degenerates to Wanyamon after being forced to digivolve to BlackGaogamon due to Yuu's Dark Digisoul. After Yuu gains his confidence, he digivolves to MachGaogamon. 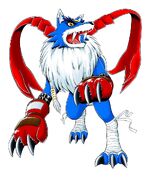 Gaogamon is Gaomon's Champion form. His name is a combination of the Japanese onomatopoeias "Gao" and "Ga," which are used to describe the sound of a growl. He resembles a large blue Akita Inu dog.

Gaomon first digivolves to Gaogamon in order to fight a super strong Meramon. His powers are limited, however, as Yuu doesn't have a Digivice to control his Digisoul with.

Gaogamon makes a cameo appearance with his Tamer as an opponent in Digimon World Dawn and Dusk's Legendary Tamer Quest. 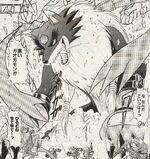 BlackGaogamon is an alternate Champion form of Gaomon.

BlackGaogamon is the result of Yuu's emotions causing him to emit a Dark Digisoul. After rampaging around and killing all of the Commandments in the area, he degenerates to Wanyamon. 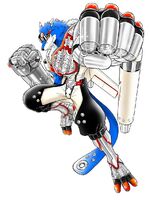 MachGaogamon is Gaomon's Ultimate form. He obtains this form when Andromon gives Yuu a Data Link Digivice. He beats back Chaosdromon until retreat and then goes after him once regrouping with Tsurugi and RizeGreymon.

Facing Chaosdromon once more, MachGaogamon is infected by a virus and has his Chrome Digizoid damaged by Chaosdromon's far stronger Red Digizoid. But revived by Yuu's Digisoul, he proceeds to heavily wound Chaosdromon with his own weapon before retreating to regroup with RizeGreymon. When Yuu receives a Digimon Twin, he digivolves to ZeedGarurumon. 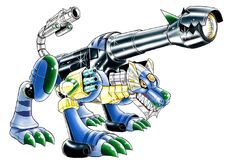 ZeedGarurumon is Gaomon's Mega form. He is one of the Arbitrators along with VictoryGreymon, designed to be able to destroy Yggdrasill should it become corrupt. He moves only when NEO comes to life, but is carelessly tossed aside by him and has his Beast Digimemory taken. Yuu's will revives him however, and after numerous attempts manages to wound NEO, his power gives VictoryGreymon the opening to strike. His purpose complete, he turns to stone, to be reborn in Yuu's Digimon Mini.