DigimonWiki
Register
Don't have an account?
Sign In
Advertisement
in: Articles with section stubs, Partner Digimon, Characters in Digimon Ghost Game,
and 2 more

Gammamon is the partner Digimon of Hiro Amanokawa in Digimon Ghost Game.[2][1]

Gammamon is a Digimon that ended up with Hiro Amanokawa through his father, Hokuto Amanokawa. Brimming with curiosity, he has a habit of trying to bite everything. Despite being mischievous, he obediently listens to what Hiro and the others say. His favorite food is chocolate, going as far as calling it "Champion".[1]

Compared to Angoramon and Jellymon, Gammamon's nature is more like that of a young child. He often uses descriptive words for food and often mispronounced certain phrases such as Trick and Treat as "Turkey and Treatment". This goes in line with him taking on the role of Hiro's younger brother. Despite his young demeanor, Gammamon can muster up the courage to confront challenges and think on the same level as his friends.

Gammamon's past is shrouded in mystery, when Piximon attempted to erase his existence from the past, the little traveler was shown to be confused as to what BetelGammamon was. 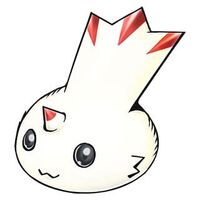 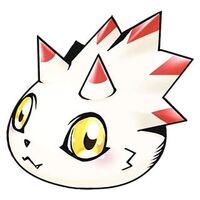 BetelGammamon is one of Gammamon's Champion forms. It is offense-oriented.

KausGammamon is one of Gammamon's Champion forms. It is flight-oriented. He is one of the few forms that Hiro can ride on.

GulusGammamon's spirit is drawn out of Gammamon when Clockmon attempts to steal his time away, quickly subduing the monster. The Sewn-lip Man

When Bokomon sacrifices himself to protect Gammamon from Sealsdramon's attack, Gammamon digivolves to GulusGammamon in a furious rage that rapidly saps the Digivice V. Demanding an explanation from Sealsdramon, GulusGammamon smirks at the assassin's shallow motivations and callously executes him. He dismisses the rest of the party and attempts to break out of the digital field into the real world, easily fending off TeslaJellymon and Angoramon before Hiro steps between them, and memories of Bokomon cause GulusGammamon to de-digivolving back to Gammamon. Executioner

When in danger of Arukenimon and Hiro attempts to stop her, Gammamon digivolves into GulusGammamon again and stops Arukenimon to prevent him from being devoured. GulusGammamon then proceeded to defeat Arukenimon with his Desdemona. When the fight ended, Hiro wanted to speak with him, GulusGammamon however told Hiro to stay back and that he would speak with Hiro later before de-digivolving back to Gammamon. The Spider's Lure

The Gammamon DiM Card, an expansion for the Vital Bracelet Digital Monster series of virtual pets, is inspired by Gammamon and his evolutions.[4]