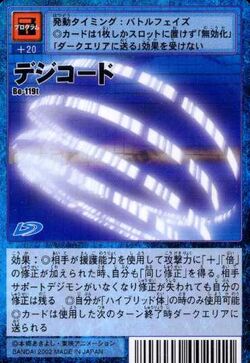 Fractal Code also appears in Digimon World 4, for a few moments after an enemy is defeated.

Fractal Code is the data that makes up a Digimon and can be obtained when a Digimon is destroyed. It is also the fabric that makes up the Digital World itself, as throughout Digimon Frontier, large sections of terrain start disappearing as fractal code is drained from the world. The fractal code is then transplanted into other Digimon and is able to be released by defeating that Digimon and scanning it into a D-Tector; the D-Tector can then release the code back into the world in order to repair the part that the code was stolen from.

Every lifeform in the Digital World is also made up of fractal code, and the protagonists can scan a ring or rings of this to allow them to spirit evolve.

The elemental spirits of the Ten Legendary Warriors are also contained within the fractal code of both the protagonist and antagonist Warriors. When any of them are damaged to a critical level, their fractal code is revealed along with their Spirits, allowing their theft. This happens to Zoe Orimoto Can't Keep a Grumblemon Down and Tommy Himi A Hunka Hunka BurningGreymon, resulting in them not being able to spirit evolve until their Spirits are returned.

Mercurymon is one of the Digimon who best demonstrates the power of fractal code. When Seraphimon is defeated, Mercurymon is able to absorb his fractal code, which he then uses to assume a corrupted form of Seraphimon called ShadowSeraphimon. When he is defeated, the fractal code is recovered and sent back to Seraphimon's Digi-Egg, causing him to be reborn as Patamon. The fact that he returned in his Rookie form may be to do with his status as a Celestial Digimon however, as when Ophanimon and Cherubimon came back without their fractal code being returned, they came back at the Rookie level too. Darkness Before the Dawn If the Digimon has been mortally wounded, scanning their fractal code will generally revert them to their purified form before they die, but otherwise, it will simply force them to degenerate to a lower level.