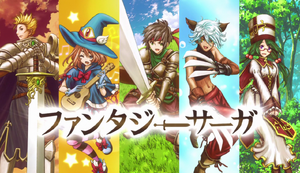 Fantasy Saga is a popular game boasting over 3 million downloads that is played by Takeru "Watson" Wato, Kenta, and Kouki. Yujin Ozora and Haru Shinkai both downloaded the game but haven't really played it, while Haru remembers its commercial. The Ropuremon associated with the game has received recognition for the game's quality and popularity. On October 15, Watson is bragging about his accomplishments in the game when Haru asks to see his equipment. His character status screen showing nothing but a starter character, however; this affliction soon spreads to the others. Haru sees an L-Virus-infected Ropuremon emerge from the phone. Once Ropuremon is purified, the accounts return to normal. The Character I Leveled Up is Naked?! Ropuremon's School Dungeon!