Etemon is the second main villain that the DigiDestined encounter and the first they come into conflict with when they arrive on the continent of Server.

Etemon is one of the first creations of Apocalymon, along with his predecessor, Devimon, and successor, Myotismon. The most technological among the three, Etemon can pinpoint any location at will via his Dark Network, and has a very large army of Digimon working for him throughout all of the desert region of the Server Continent, which is hardwired to his base via his Dark Network.

The Champion forms of the children's Digimon are not strong enough to defeat him, and it is revealed that they need to Digivolve to their Ultimate levels to stand a chance against him.

However, in order to do that, they have to find the crests. Through their battles with him, they each find of their crests, but it turns out that more is needed to Digivolve to Ultimate.

Etemon has the character of an Elvis Presley impersonator. He is often frustrated when people fail to acknowledge his over-inflated ego.

Etemon considers himself to be a great singer, and often has his minions to praise his terrible music, even though most of his mooks, mostly Gazimon, do enjoy his music genuinely.

Etemon is ultimately defeated when the children go into an upside-down pyramid to find Sora's crest. However, they also find Datamon, a prisoner of Etemon, who kidnaps Sora and tries to use her to defeat Etemon.

The children come up with a plan to infiltrate the pyramid to save her, and while carrying it out, Tai is forced to accept his courage, activating his crest.

Datamon, in a last ditch effort, programs the Dark Network to absorb all Digimon in its reach, including himself and Etemon, but Etemon fuses with the Dark Network and uses its power to attack the children.

However, Greymon digivolves to MetalGreymon and uses his "Giga Blaster" to defeat Etemon. The Earthquake of MetalGreymon

Etemon is a boss in the "Nanomon of the Labyrinth!" chapter. 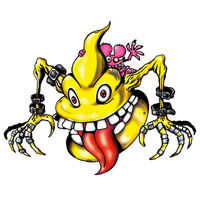 Etemon (Chaos) is a form Etemon assumes after fusing with the Dark Network.

Plunged into his own net of darkness by Datamon, Etemon was assumed dead by the DigiDestined until he emerged form the rubble of the upside-down pyramid that used to be his base after it collapsed under the strain of his network's dark power.

Etemon becomes significantly stronger and vastly overpowers Kabuterimon and Birdramon, reverting them to their Rookie forms and manages to take down Greymon, only to have him digivolve to the Ultimate level and have the villain outclassed himself and dipped into a dimensional gate, swearing revenge as he was absorbed. However, Etemon was not defeated just yet. The Earthquake of Metalgreymon

Etemon survives the battle with MetalGreymon without any injuries at all and falls into a time-space limbo.

He refuses to accept such a fate, and fully absorbs the Dark Network's energy to return to the Digital World, while digivolving into the Mega-leveled MetalEtemon in the process, increasing his already over-inflated ego by becoming vastly faster and more powerful and, courtesy of his now-armored body, having a much higher resiliency and stamina.

MetalEtemon goes looking for the DigiDestined and finds Mimi, Joe, Palmon, Gomamon, and Ogremon, but after a short and intense yet fully humorous battle with one of the Dark Masters, Puppetmon, they escape, and MetalEtemon continues searching, and gets very close to them. Etemon's Comeback Tour

Luckily, SaberLeomon rescues the team, and takes them to Digitamamon's now-abandoned restaurant.

However, MetalEtemon tracks them down and attacks, and SaberLeomon gets wounded while protecting Mimi from MetalEtemon's "Dark Spirits DX" by taking a direct hit, which eventually proves fatal.

Gomamon digivolves to Zudomon, and when MetalEtemon brags that his armor is made out of "indestructible Chrome Digizoid", Zudomon reveals that his hammer is also made of the same metal, and uses it to crack MetalEtemon's armor.

MetalEtemon is then finally finished off for good when SaberLeomon rams his claw through the crack in his chest with all the remainder of his power. As he dies, he promises the DigiDestined will pay big time for his death. Ogremon's Honor 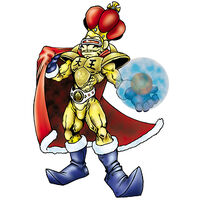 Retrieved from "https://digimon.fandom.com/wiki/Etemon_(Adventure)?oldid=518311"
Community content is available under CC-BY-SA unless otherwise noted.